In Sudan, where over a quarter of the population is in need of humanitarian assistance, the year 2020 has seen a deepening economic crisis exacerbated by COVID-19 containment measures and rising tensions in parts of the country. In 2020, REACH led the first multi-sector needs assessment (MSNA) ever conducted in Sudan, across all 18 states and the Abyei Area, to provide humanitarian actors with an evidence-based understanding of humanitarian needs in the country, including for areas where humanitarian actors have traditionally been absent.

The assessment, which has provided primary data for the 2021 Sudan Humanitarian Needs Overview, consisted of 13,769 household surveys conducted with the support of data collection partners operating on the ground, covering refugee, internally displaced (IDP), and non-displaced population groups. In particular, the MSNA allowed to address some of the significant information gaps affecting areas where humanitarian actors have historically been less present, and as such was the first-of-its-kind to provide a country-wide picture of multi-sector needs.


“The MSNA has been a vital component of the analysis in the 2021 Humanitarian Needs Overview. It provides a much needed up-to-date multisectoral understanding of humanitarian needs across Sudan. The value of the MSNA will multiply when in subsequent years the exercise is repeated allowing us to measure progress.” – James Steel, Head of Communications and Information Management, OCHA Sudan.

A quick glance at some of the key findings from the 2020 MSNA highlight the extent to which the data collected will be central in providing the basis for a more effective humanitarian response in the country. 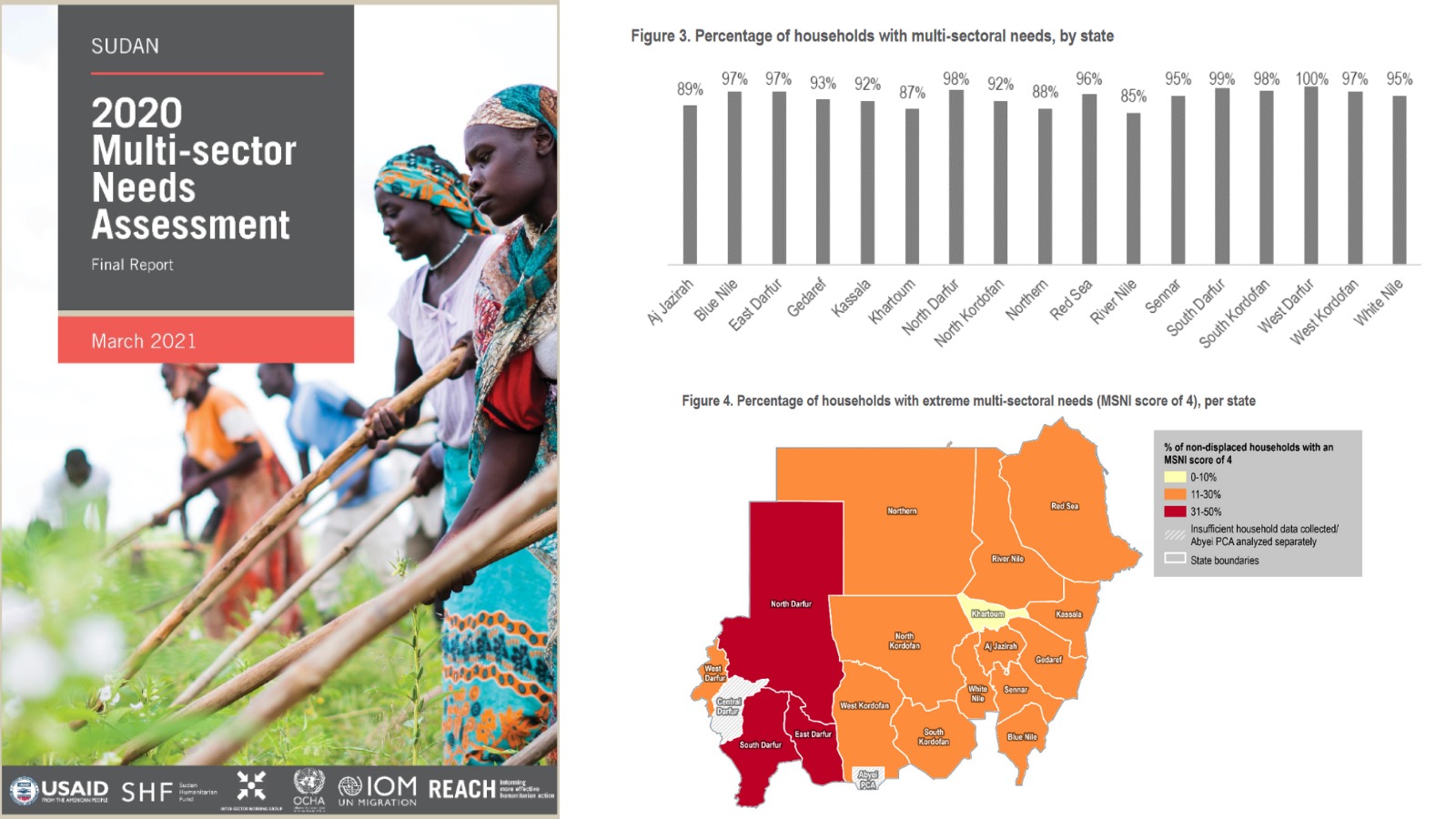 Access to healthcare services remains challenging across the whole country

The health system in Sudan had already been weakened, before 2020, by years of low funding, a lack of personnel, and insufficient supplies of medical items and medicines. Access to healthcare services is very poor across all states in Sudan, with inflation and the disruption of medical items supply chains in 2020, following the COVID-19 pandemic, negatively affecting availability and prices of services and medicine even further.

As shown in the map, in the vast majority of localities more than 50% of interviewed households had experienced barriers to accessing healthcare, among households that attempted to access services in the 30 days before the assessment. While the situation in the Darfurs was particularly problematic, with a number of localities where between 90 and 100% of households had experienced difficulties when accessing services, results show that barriers are prevalent across all 18 states.

It is also worth noting that health was the most common priority need reported by crisis-affected populations in Sudan, with 57% of interviewed households listing “Healthcare” as a self-reported priority need.

The ongoing economic crisis and high inflation, one of the highest in the world with an annual rate topping 200% in 2020, resulted in a protracted increase of staple food prices, which have more than tripled between the beginning of 2020 and early 2021, as well as an increase of fuel and power tariffs. This situation has resulted in decreasing purchasing power for the majority of the population, and negatively affected the ability for households to feed themselves, with food insecurity affecting some localities and population groups more than others. The most vulnerable, especially refugees and IDPs, are struggling due to high food prices, cash and fuel shortages and the disruption of basic services. Compounding these issues, in September 2020,  the Nile river rose to its highest level in 100 years, destroying over 111,000 homes and forcing the Government to declare a 3-month state of emergency.

Challenges to obtaining enough money to meet households’ needs were prevalent across the country, and “Livelihoods support / employment” was reported as a priority need by 50% of households interviewed. Meanwhile, the assessment highlighted significant differences between different localities and/or between different population groups in terms of access to food.

Food Security and Livelihoods experts had predicted high levels of food insecurity for the year 2020, with an atypically high number of people requiring emergency food assistance expected for that year. The results of the MSNA can help prioritise assistance by providing further nuance on the geographical areas and population groups that appear to be most affected. 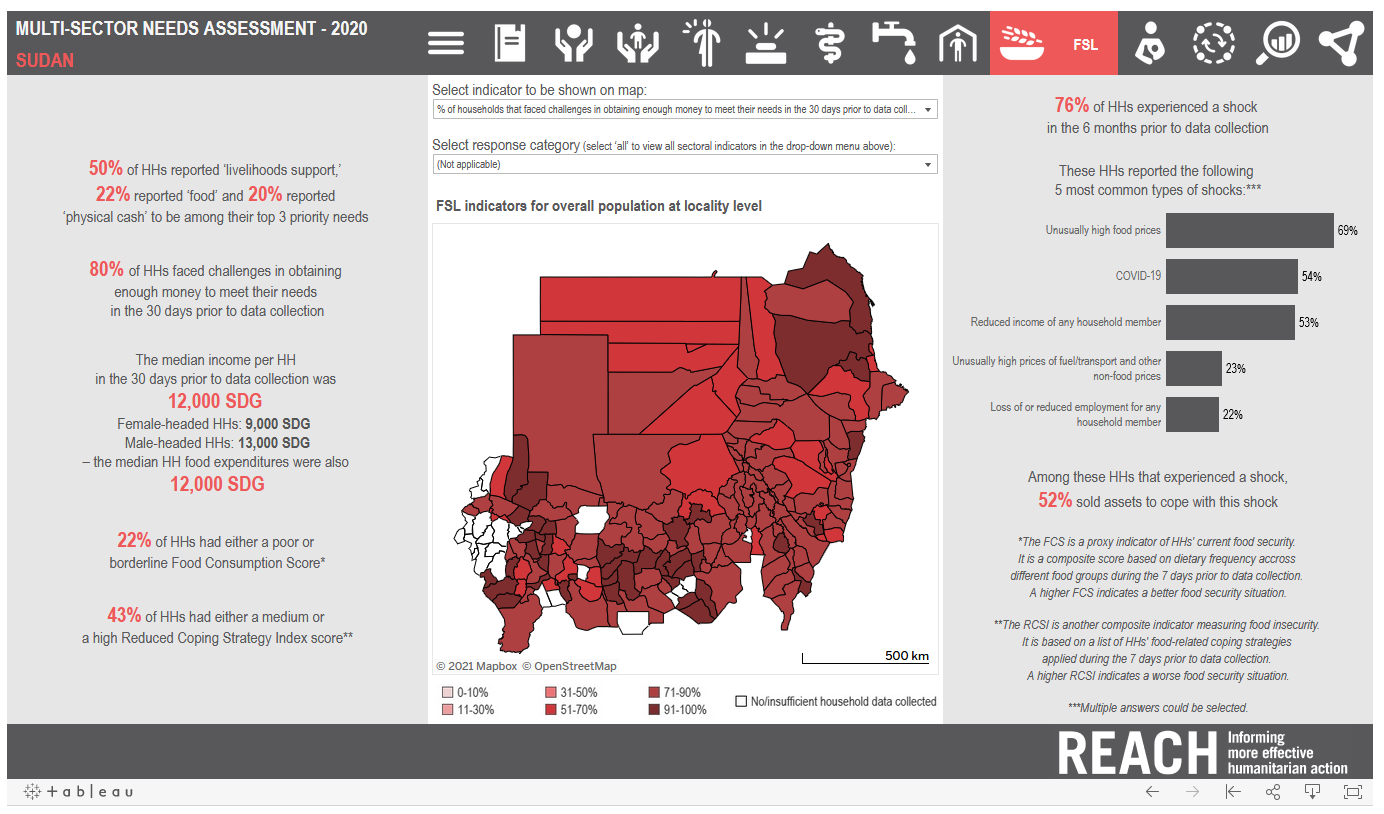 Findings from the 2020 MSNA have already been integrated into the 2021 Humanitarian Needs Overview and informed the analysis on sectoral and inter-sectoral needs conducted by sectors and OCHA.

Now that the assessment has established a first country-wide baseline of humanitarian needs across different population groups, there is a need to consolidate and build on lessons learned from this exercise, and ensure that collaborative assessments of similar scope are carried out in the future to measure progress made by the response.

For a more comprehensive overview of findings from the assessments, please visit Sudan’s page on the REACH Resource Centre.