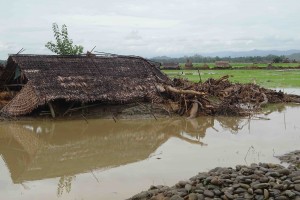 For people living in Myanmar’s coastal state of Rakhine, natural disasters are a regular feature of everyday life. Since the year 2000, the state has been hit by a cyclone once every two to three years. In July 2015, Cyclone Komen displaced thousands from their homes and destroyed much of the season’s rice crop in northern parts of the state. The state’s vulnerability to disasters is further exacerbated by poverty, local sectarian tensions, and one of the highest poverty rates in the country.

In this context, REACH was mobilised between March and July 2015 to conduct a study on knowledge, attitudes and practices related to disaster preparedness across Maungdaw, Sittwe, Pauktaw, Minbya and Myebon townships in northern Rakhine. The objective of the study was to better understand how people in the state prepare for and respond to natural disasters, in order to inform disaster risk reduction (DRR) activities conducted by aid agencies and government authorities in the region. The research took place under the Program for Improved Disaster Management and Resilience Against Natural Disasters (IDM-RAND), which is funded by the Office of U.S. Foreign Disaster Assistance (OFDA), led by the International Organisation for Migration (IOM) and comprises of ACTED, the Asian Disaster Preparedness Centre, and Swanyee Development Foundation.

The assessment found that people in northern Rakhine state have lived through multiple disasters and are well aware of the threats they pose. Most view dealing with the impact of natural disasters as a high priority and are interested in taking part in disaster risk reduction activities.

Despite this, a number of gaps persist in people’s capacity to cope with natural disasters. Very few people reported having received any education on disaster risk reduction. Furthermore, while the majority of respondents reported having access to early warning systems via radio broadcasts, these warnings are not always easy to interpret, and for some, are not delivered in a language they can understand. In addition, the majority of people are dependent on ad-hoc disaster shelters such as monasteries and schools, and a substantial minority have no evacuation point at all.

These findings demonstrate a clear space for aid agencies and the government to upscale disaster risk reduction education and preparation activities at both the community and administrative level. More broadly, they highlight an urgent need to mainstream disaster risk reduction into activities designed to address the wider daily challenges faced by people in Rakhine state, including accessing basic services, securing livelihoods, and building stronger and more resilient communities.