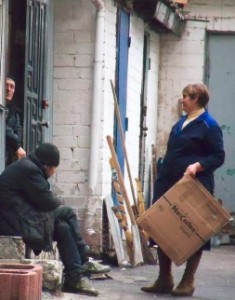 Following the outbreak of the conflict in Ukraine in early 2014 and despite two successive ceasefires in September 2014 and February 2015, the humanitarian situation continues to deteriorate. To date, the conflict has affected an estimated 5.2 million people and caused the internal displacement of more than 1.4 million in eastern Ukraine. Internal displacement has intensified the need for food, shelter, and other essential assistance in conflict-affected areas. Despite this, humanitarian access remains limited and full knowledge of the situation is unavailable.

In this context, REACH was deployed to Ukraine in the framework of its ongoing partnership with the Global Shelter Cluster to facilitate an assessment of Emergency Shelter and Non-Food Item (NFI) needs between May and July 2015. The assessment sought to provide information about the shelter and NFI needs of IDP households across five oblasts in eastern Ukraine so as to establish a baseline of needs against which the humanitarian response can be monitored and tailored.

The displaced population was found to be living in a variety of shelter types, ranging from rented and owned accommodation to hosted arrangements and collective shelters. In terms of shelter conditions, 38% households were found to be living in poor or inadequate conditions, primarily due to insufficient access to hot and cold running water, heating, insulation and waterproofing. Accommodation type and urban or rural location were important determinants for household access to adequate shelter conditions. Furthermore, given that private funds were the main sources of money to pay for rent and non-food items, the depletion of personal funds and lack of livelihood opportunities is likely to become an increasing issue in the coming months. For instance, 20% of the households reported to be able to pay their current rent for less than 3 months while almost 38% perceived themselves as being under threat of eviction. Overall, the findings point to a situation in which IDPs are becoming increasingly vulnerable, with many living in sub-standard conditions.

As the humanitarian response makes the transition from the emergency phase to a more protracted approach, it is important to place the focus on resilience-based programming. Provision of livelihoods support, especially for those most vulnerable, and the provision of different types of assistance for households willing to improve shelters themselves present particular opportunities for future programming.