Venezuelans arrive to be registered at a newly opened reception site, Nova Canaã in Boa Vista, in partnership with the Federal Government, Brazilian Army and Boa Vista Municipality in late-April 2018. Sixty-five UNHCR tents were set up to welcome the 339 people the shelter received on the first day. ©UNHCR

As a consequence of the ongoing economic crisis and social turmoil in Venezuela, an increasing number of Venezuelans are crossing the northern border to Brazil to seek asylum, safety and better livelihood opportunities. According to estimates, over 50,000 Venezuelans are living in Brazil currently, of which half in the northern city of Boa Vista, the capital of Roraima state.

In the course of the first half of 2018, Roraima received 16,000 asylum requests, marking a 20 percent increase to the annual numbers seen the year before. During the past months, the influx of migrants and asylum seekers has reached as high as 420 arrivals per day, which has significantly stretched the capacity of the state to provide basic services to both residents and new arrivals. A state of emergency was declared in Roraima in February and the UNHCR called to assist in the response subsequently.

REACH was deployed to Brazil in April in order to support the UNHCR by providing up-to-date information on the needs and humanitarian conditions of the migrants and asylum seekers residing both in and out of displacement sites in Boa Vista city. UNHCR and REACH quickly launched a series of area-based assessments with the aim of gathering data on the vulnerabilities of the migrant population. Seven area-based assessments were conducted in 57 neighborhoods, consisting of interviews with almost 500 Venezuelan migrants and asylum seekers as well as several local community leaders and health and education service providers.

The findings from the assessments revealed that food insecurity stemming from the ongoing economic crisis was among the main push factors leading Venezuelans to migrate to Brazil. Even though several asylum seekers left home in the hope of better living conditions, living conditions per se were not the factors weighing in their decision to stay in Boa Vista. Most asylum seekers chose to stay in the city due to its geographic proximity to the border, which has enabled the Venezuelans to maintain a possibility of a return. Access to the border has also provided the option of sending food and money over to families still residing in Venezuela. In spite of the clear benefits of the border region, findings by UNHCR and REACH highlighted that significant numbers of Venezuelans chose to stay in the city due to the lack of resources to continue their journey.

Furthermore, research findings underscored that asylum seekers engaged in the job markets of Boa Vista faced repeated challenges including the lack of required security equipment in construction sites and problems in receiving the agreed-on wages from employers. Women respondents reported sexual and moral harassment as threats they faced as seeking for employment or working in Brazil.

The vulnerability of the Venezuelan population was noted to be further compounded by the general lack of information on their rights and possibilities in Brazil, including lack of information on local labour laws and the rights of migrants. Most of the interviewed reported Facebook and WhatsApp groups and word-to-mouth sources as their key means of accessing information in Brazil.

Building on this first round of area-based assessment, REACH will continue monthly rounds of data collection in partnership with the UNHCR.

For a more comprehensive overview of the findings from REACH assessments, visit Brazil’s page on the REACH Resource Centre. To have a look at the area based assessments, click: 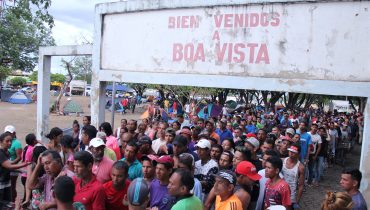 Brazil: Unemployed and with little access to aid – For Venezuelan asylum seekers challenges continue beyond the border

As a consequence of the ongoing economic crisis and social turmoil in Venezuela, an increasing number of Venezuelans are crossing the northern border to Brazil in order to seek asylum, safety and better livelihood opportunities. According to estimates, over 50,000 Venezuelans are living in Brazil currently, of which half in the northern city of Boa […]