Displacement associated with disasters and the effects of climate change is one of today’s most serious humanitarian and development issue. In the first half of 2020 alone, disasters triggered 9.8 million new displacements, and most were linked to weather-related hazards such as storms, floods and droughts. In northwest Syria, extreme flooding events are devastating families already reeling from ten years of conflict, displacement, economic ruin, and the spread of the COVID-19 pandemic. Seasonal floods have become increasingly severe in the region, gradually eroding the resilience that communities have against ongoing and future shocks. Understanding the role of climate change, how it drives humanitarian crises globally, and what can be done about it, is critical for informing an effective response and ensuring that sustainable development follows suit.

Data has increasingly become the prism through which the humanitarian and development community can engage with climate change risks, and account for the situation of populations affected by them. In Syria, REACH teams have been monitoring the needs of households recently displaced by the floods, as well as leading flood hazard mapping efforts destined to help internally displaced persons (IDP) in Northwest Syria build their resilience to future shocks. The combination of these two research projects, and the data collected, has the potential to inform a more targeted and informed response to the current shocks created by the floods in Northwest Syria. To leverage such tools is key for supporting IDPs who are among the most vulnerable to the impacts of natural hazards. IDP sites and settlements harbour very difficult living conditions, and are frequently located on land that is prone to seasonal flooding. Floods can sweep away their shelters, damage other infrastructure, and destroy food stocks. In addition to these immediate effects, poor drainage and persistent standing water in and around shelters can lead to numerous health and sanitation problems. With the current COVID-19 outbreak, and the recent floods in Northwest Syria, degrading conditions in IDP camps and settlements are of particular concern, especially during winter.

The Emergency Needs Tracking is a data collection methodology developed by REACH in Syria that is geared to collect information on the needs and vulnerabilities of affected populations on the fastest basis possible, usually within 0 to 3 days. The added-value of this methodology is inherent in sudden-onset disasters, such as floods, where the need for timely information is key to support populations made vulnerable by an abrupt crisis. The REACH team in Syria in charge of leading the ENT assessment is able to immediately access communities affected by the floods and quickly gather crucial information on their needs and vulnerability to support the humanitarian response.

By assessing communities and camps impacted by the recent floods, the team was able to inform response actors on a daily basis, allowing them to coordinate and shape their response to meet the needs of affected populations as reported by them directly.

Recent rounds of the ENT tool showed that:

Improving the speed and the quality of information available from the situation of populations affected by the floods in Northwest Syria is vital to continue supporting the Syrian people who struggle on a daily basis to meet their basic needs. To make sure that this information is readily available to aid actors, and easily digestible into concrete action, REACH has developed an interactive dashboard where all the data from successive rounds of ENT is fed. The dashboard allows response partners to filter through various information needs that can help them target their response, both geographically and through time. 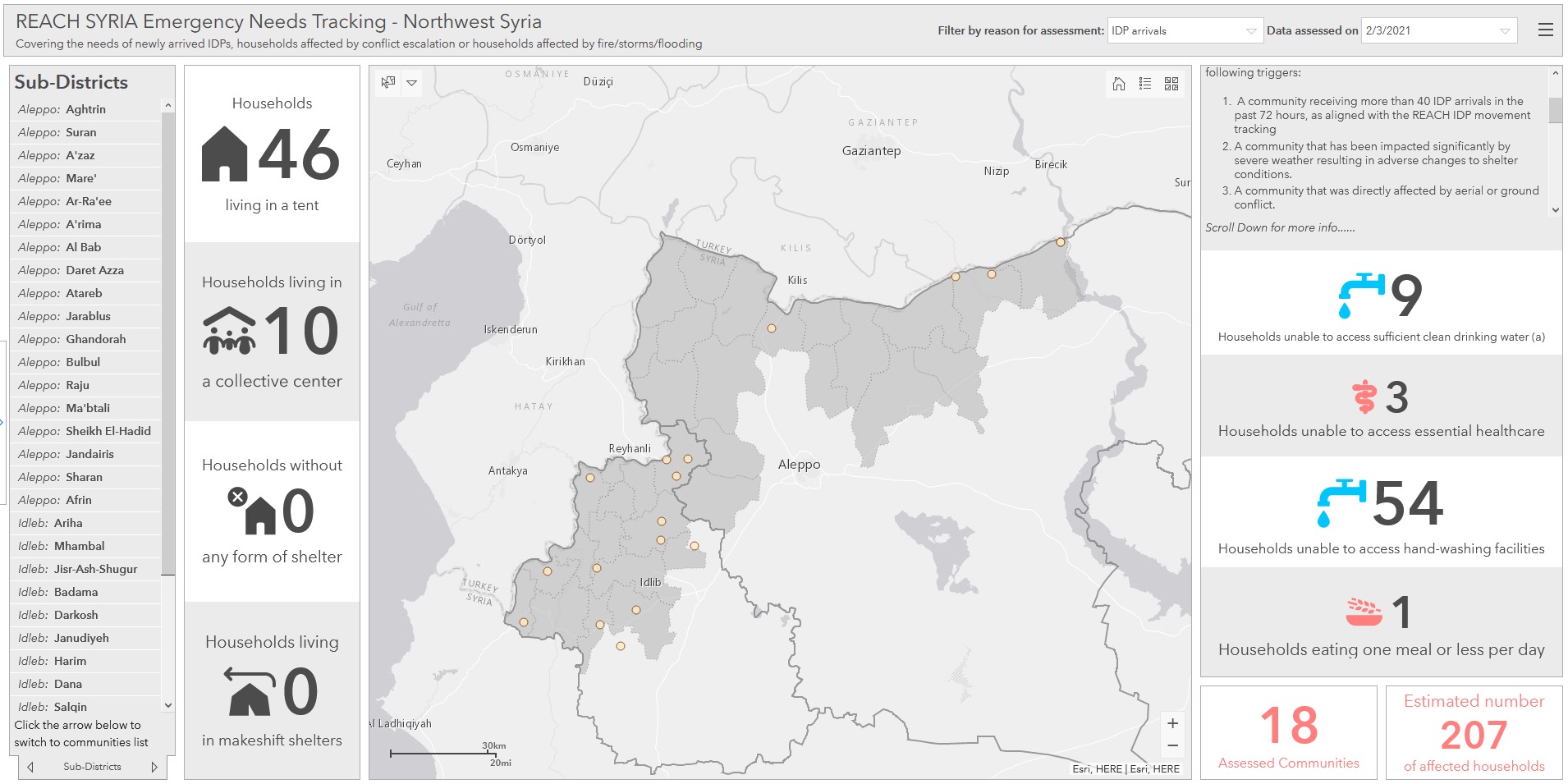 Flood hazards are a product of flood depths and flood velocities. Deep water and high velocity flows pose a great risk to people and their property, particularly in situations where shelters, roads, and other infrastructure are poorly constructed or maintained. This is often the case in the informal IDP settlements in Northwest Syria where storms and floods have devastating effects for communities residing there.

The flood hazard mapping process utilized by the REACH Syria team involves several stages beginning with the delineation of catchments/watersheds and the definition of major overland flow paths and streams. Utilising SAGA terrain analysis, hydrology and channel tools to process Digital Elevation Model (DEM) data from the Japan Aerospace Exploration Agency, flow paths and catchments for the whole of Syria were defined.

In parallel the REACH Syria team in partnership with UNOSAT was working to identify IDP shelters from satellite imagery using a combination of machine learning detection algorithms and manual interpretation of imagery by analysts from the REACH and UNOSAT teams.

Using the high-level overland flow and catchment data and the IDP shelter locations, the team was able to overlay the two in order to identify areas where high IDP shelter densities lay in close proximity to major overland flow paths. Using this method, supplemented by numerous reports of flooding from local news agencies and CCCM cluster members over the past 5 years, the catchment of northern Dana was selected as the study area for a more detailed flood hazard assessment.

Simulating flood-like conditions in the northern Syrian context by feeding data into a hydraulic modelling software, REACH teams were able to evaluate locations within the area that were most exposed to severe flood hazards, and also identify which infrastructure and settlements were most vulnerable.

Results from the hydraulic modelling exercise revealed that during modeled extreme rainfall events, nearly 2,500 IDP shelters within the study area are exposed to a significant flood hazard. 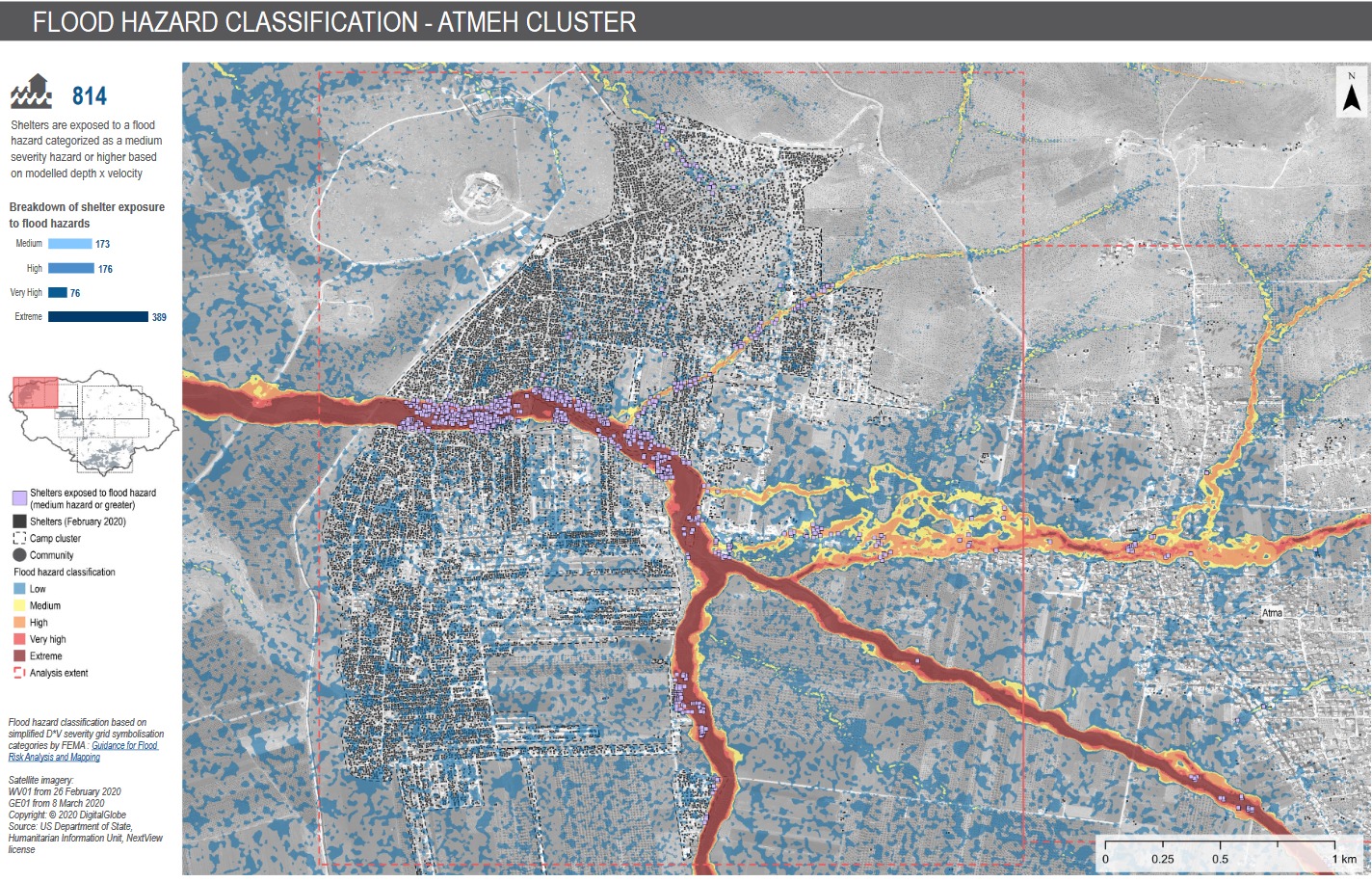 Extract from the REACH IDP Camps and Informal Sites Flood Susceptibility and Flood Hazard Assessment. The image shows the result of the flood hazard classification in the Atmeh Cluster in North Dana sub-district. View the report for results in other clusters, and for more information on the methodology used.

The results of REACH’s flood hazard assessment in northern Dana are published on the REACH Resource Centre, with more detail on the modelling approach, and in-depth analysis on the flood susceptibility of the area studied.

Previous published rounds of the ENT are available here.

The entire catalogue of information products released by REACH in Syria can be viewed on the REACH Resource Centre here.

For queries related to activities of the REACH Initiative in Syria, please reach out to Korbinian Schink, REACH Country Coordinator, Syria.

For other requests, feel free to reach out to Emmanuel Gamard, Communication Officer, IMPACT Initiatives.