Living in a country where a quarter of the land is barely above sea-level, the people of Bangladesh are especially vulnerable to the effects of climate change and the havoc wrought by natural hazards. Those who live along the coastline are even more prone to the destruction brought by sudden-onset disasters, whilst a rising population density makes the risk reality for millions today.

Bangladesh has a history of devastating cyclones: at the end of 1970, the deadliest cyclone on record resulted in over 500,000 deaths; in April 1991, a devastating cyclone hit the Chittagong district of southern Bangladesh causing over 130,000 reported fatalities; and in 2007, the destruction brought by Cyclone Sidr led to another 3,000 causalities. While certain measures, such as the construction and use of cyclone shelters, have helped reduce the number of cyclone-related causalities, Bangladesh is unable to fully cope with the devastating consequences of disasters caused by natural hazards. Further compounding this complex and precarious situation has been the influx of Rohingya refugees in August 2017, leading to roughly 900,000 Rohingya refugees now living along the southern coastline of Bangladesh. Fear of the wreckage a powerful storm would cause across the refugee camps is a constant concern for responders on the ground as well as the Bangladeshi government.

In order to help populations most vulnerable to the effects of cyclones and other natural disasters, REACH has been working to establish a baseline understanding of population centers, natural hazards, the natural environment, and hazard mitigation measures in both host communities and refugee populations. Through a combination of assessments, mapping exercises, trainings, and as the co-chair of a subgroup of technical experts mandated under the Information Management and Assessment Working Group (IMWG) as the Natural Hazard and Risk Analysis Task Force (NatHaz TF), REACH has helped to collect, streamline, and standardize information- valorizing how it should be interpreted in Cox’s Bazar. The NatHaz Task Force is a dedicated sub-group of technical experts mandated with unifying, analyzing, and then disseminating digestible natural hazard information destined for operational actors on the ground.

Establishing a baseline to create a shared understanding

To enhance preparedness in the case of a sudden-onset disaster, it is critical to have a baseline understanding of the locations of both host and refugee populations, as well as potential safe heavens. Yet previously the only reliable information available consisted of a fragmented list of population center names and cyclone shelters. Without accurate and cross-agency harmonized spatial databases, contingency planning remains extremely limited, in particular for non-local actors. To overcome this barrier, REACH mapped out both host community villages as well as cyclone shelters, in partnership with the ISCG and local government. The resulting maps (for Teknaf and Ukhiya) and databases are continually being used by lead agencies and other stakeholders in their operations on the ground. 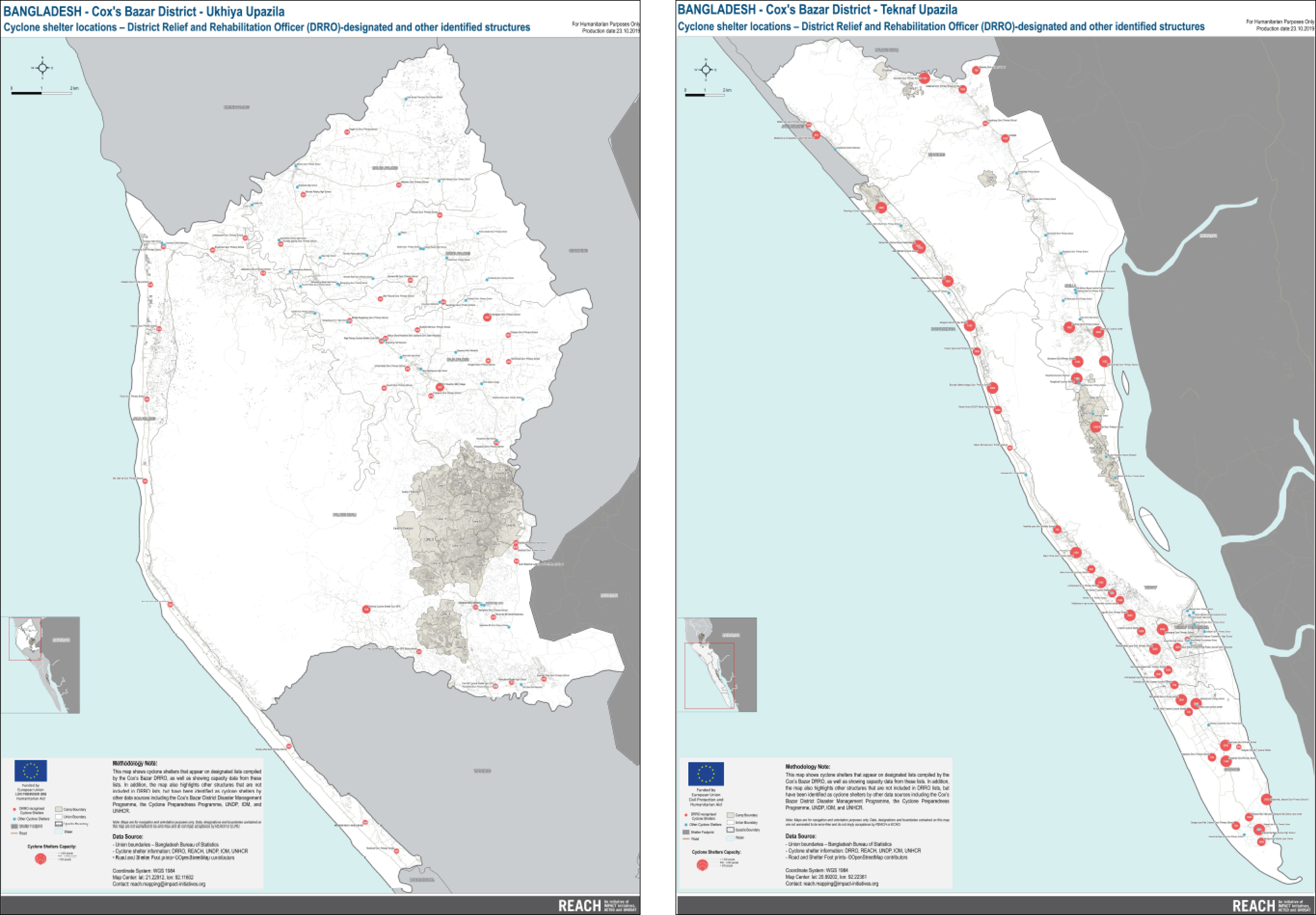 Additionally, as the co-chair of the NatHaz Task Force, REACH substantially expanded the existing knowledge on baseline environmental conditions and natural hazards. The task force also engaged a diversity of non-humanitarian actors including NASA, Columbia University, ARUP, and Deltares for complex flood and landslide susceptibility modeling, which also includes machine-learning modeling. It has been the task force’s job to translate the results of these modeling efforts into actionable products that enable a shared understanding for partners on the ground. The results of this scientific process can be seen in the maps REACH produced, which are continually updated as model inputs improve. A much-anticipated storm surge map is expected in March 2020, along with regular updates and improvements to existing products.

Hand-in-hand with the release of Natural Hazard information products, REACH provides trainings to key decision-makers to ensure that the analysis is properly interpreted, and shapes operations effectively. These trainings have ranged from workshops delivered directly to members of the IMWG in Bangladesh on basic geographic information systems (GIS) and product interpretation, as well as REACH’s key role in the Natural Hazard Module of the joint-capacity sharing initiative, which aims to train government staff in a wide spectrum of skills relevant to camp and information management. REACH also brought support to a UNDP-facilitated workshop for disaster risk reduction (DRR) stakeholders, in partnership with NASA-Columbia (COMPAS).

Through continued coordination and capacity building endeavors, REACH facilitates information gathering and sharing to help improve Bangladesh’s ability to respond to natural hazards and to assist those most vulnerable to the effects of climate change.

For questions, or media-related requests, feel free to contact:

This article covers humanitarian aid activities implemented with the financial assistance of the European Union.