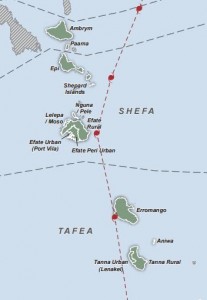 Following Cyclone Pam, which caused widespread damage when it struck Vanuatu on March 13th 2015, REACH teams were on the ground to implement a detailed inter-agency shelter and settlements vulnerability assessment in partnership with the Global Shelter Cluster.

The aim of the assessment was threefold: to verify the coverage of emergency shelter and NFI assistance and conduct a gap analysis and to inform the development of a comprehensive shelter and settlements recovery strategy for the Vanuatu. The study also sought to establish a baseline and method for a potential longitudinal study of recovery. Primary data was collected between 15 April and 1 May 2015 across 13 sample sites, including 18 islands,  1 peri-urban and 2 urban locations. These sites were selected on the basis of high levels of damage identified through initial rapid assessments led by the Government of Vanuatu. Key findings from household level data collection are presented in a series of factsheets.

Across the assessed islands, varying levels of sustained damage, access to resources, livelihoods, and assistance were found, depending on the households’ geographic location. Overall, 81% of assessed households reported that their shelter had sustained some level of damage as a result of the cyclone, with 27% continuing to host displaced friends or family at the time of assessment.

Regarding gaps, 46% of households across the affected area reported that they had not received emergency shelter assistance by the time of the assessment, with the largest gap between needs and assistance identified in peri-urban locations. Despite this, many families and already completed considerable reconstruction and repair by the time of assessment,  largely thanks to support from community networks, friends and family.

Based on the analysis presented in this report, key recommendations for recovery phase shelter programming, identified and endorsed by Shelter Cluster partners, should contribute to a more effective humanitarian response in Vanuatu.