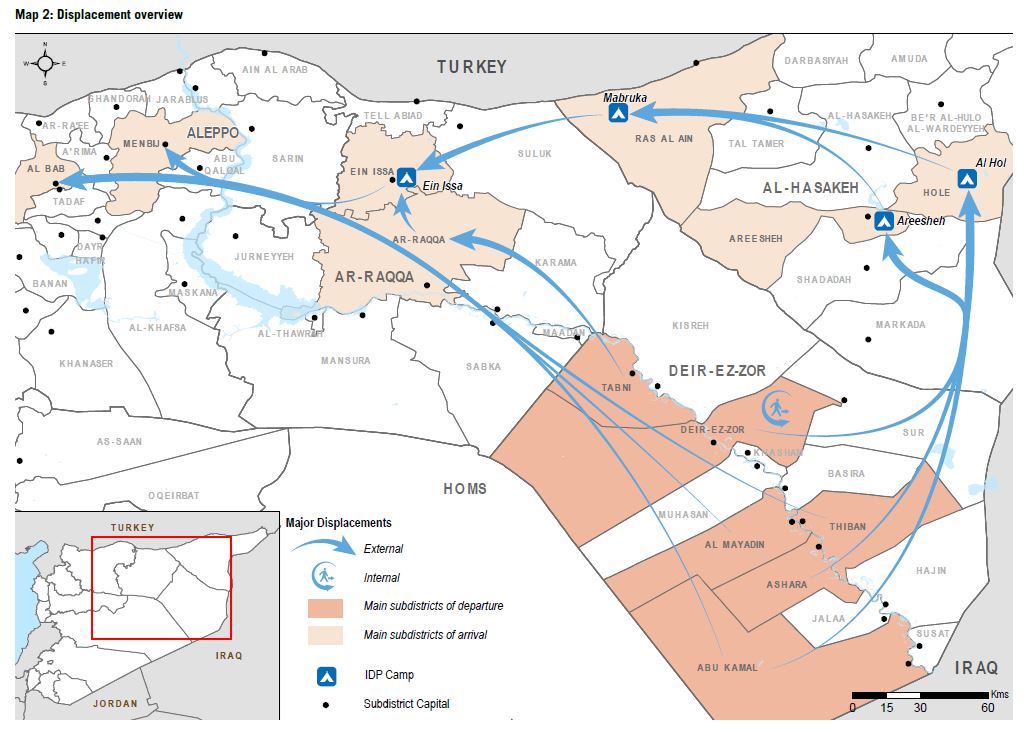 Overview of displacement from and within Deir-ez-Zor governorate

Over the past two months, conflict has escalated across Deir-ez-Zor governorate as multiple actors attempt to expel the group known as Islamic State of Iraq and the Levant (ISIL) from north-east Syria. This escalation of conflict has led to large displacement from and within the governorate, estimated at 30,000-35,000 people since the beginning of July 2017 and expected to increase significantly in the coming months. Restrictions on communication and information flows as well as extremely limited humanitarian access have led to a lack of information on movement patterns thus far.

In order to address this information gap, REACH has conducted an assessment in coordination with the CCCM cluster and the Syria Relief Network (SRN) to provide an overview of current and intended displacement patterns from and within Deir-ez-Zor governorate, as well as factors affecting movement and intended destinations. Information from the assessment comes from a combination of in-depth qualitative interviews with 11 purposively selected community focal points and quantitative community-level interviews with 23 focal points reporting on 72 communities across the governorate. This information was then supported by displacement data from the ongoing CCCM IDP Situation Monitoring Initiative (ISMI).

Three main patterns of IDP movement have been identified: the largest northwards to Al-Hasakeh governorate, with smaller numbers north-westwards to Ar-Raqqa governorate, and internally within Deir-ez-Zor. Routes and destinations are heavily influenced by movement restrictions, as people are exposed to multiple risks if caught attempting to leave, and need to adjust their routes to avoid security threats. Among the risks reportedly faced by civilians attempting to leave are the risk of detention, landmines, forced conscription, airstrikes, document confiscation and gunfire. Interviewees reported that both volume and direction of displacement are dependent on an expansion of the current ground offensives, a lack of clarity about the intentions of parties involved in the conflict, and the level of access to health services, food and water.

With an estimated 10% of the remaining population likely to leave in the next 30 days, understanding the intentions of the displaced population will be crucial to supporting the humanitarian response, especially given the ongoing access restrictions in the governorate and surrounding areas. The information collected through this exercise will feed into a broader stream of REACH assessments in Deir-ez-Zor that will seek to better understand the needs of those who have been displaced as well as those who remain in conflict affected areas.

Access more detailed findings in the Deir-ez-Zor Governorate Situation Overview: Displacement and Intentions at this link.