Without improved material, legal and physical conditions in areas of origin, populations returning home in Syria struggle to reintegrate in safety and with dignity. Yet, during the first half of 2018, 750,000 internally displaced persons and 15,000 Syrian refugees were reported to have returned. Even though these figures are a fraction of the total 12 million Syrians displaced internally and around the world, discussions related to returns are gaining momentum. As the conflict approaches its eight-year anniversary and reconstruction issues are cautiously brought to the international agenda, information on returns processes and the prospects for durable solutions for the displaced is in ever-greater demand.

As north-east Syria emerges from military operations against the Islamic State, the region has seen a noted increase in self-organised returns. In the first half of 2018, close to 155,000 people were reported to have returned to their area of origin in Raqqa and Hasakeh governorates. The recently published IMPACT report Picking up the Pieces: realities of return and reintegration in north-east Syria seeks to understand the push and pull factors behind these returns, and furthermore, to explore the actual returns process, from the challenges seen along the journey to the realities met back home.

The decision to return – safety as a pull, lack of services and jobs in place of displacement as push factors

Based on the findings of the IMPACT research, the main pull factor motivating returns was the perception of safety in the area of origin. Other factors cited by refugees included homesickness and a feeling of nostalgia, and by internally displaced (IDPs) the need to reoccupy assets and property left behind. Despite the poor living conditions reported in both the location of displacement as well as the community of origin, households reported the possibility to be closer to family and friends as key factors motivating both staying in the areas of displacement or chosing to return. 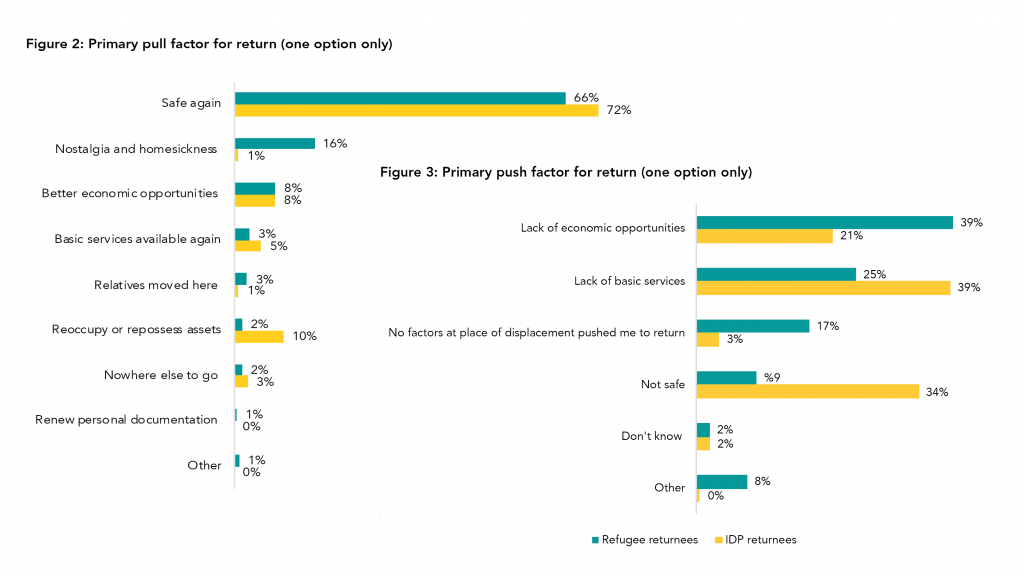 Focus group discussions with returnees found that often specific security incidents acted as the trigger for return, or provided the final impetus in the decision to return. Stories of violence and loss of family members were repeated in research discussions as having a significant impact on households choosing to return home.

Perhaps surprisingly, the study found that the level of humanitarian assistance available in the area of origin did not seem to be a significant pull factor motivating returns. Focus group discussions revealed that prior to return, returnees were reportedly not aware of the level of assistance in their area of origin or thought that they did not qualify for aid. This is in spite of the fact that returnees underscored the need for assistance upon return and reintegration.

Regarding perceptions of equity in aid delivery, approximately 40 percent of refugee returnees, 70 percent of non-displaced, and 60 percent of IDP returnees and IDPs perceived their household to have unequal access to humanitarian assistance. Such figures could have implications on community tensions in the future, especially if resource scarcity continues or worsens.

In order to inform decisions on returning, staying or modes of travel, the study noted multiple sources of information used by returnees. Households mainly relied on advice from family and friends and news and information provided by the internal security force Asayish to plan routes and modes of travel, as well as assess the choice of whether to return or not.

However, several returnees noted that information was sometimes inaccurate and that returnees could face unexpected dangers along the journey. These dangers included mines, abuse or harassment at checkpoints, as well as violence and threats from armed groups. The study also found that some returnees resorted to using smugglers who charged high fees, yet were often unreliable and unable to guarantee safety for the entire journey. The findings clearly highlight that returning is far from straightforward and conflict and instability remain unavoidable parts of everyday life whether in displacement, on the way back or once in the area of origin.

Upon reaching their area of origin, returnees reported a lack of livelihood opportunities, high living costs and insufficient healthcare services – challenges shared by the entire community. In addition to a lack of infrastructure and basic services, returnees specifically reported difficulties related to the large-scale damage of property and lack of compensation. The study found that this led to reliance on loans and support from family and friends as, having spent large sums of money during displacement and the journey home, returnees lacked the resources needed to start anew.

The study also noted that a significant proportion of assessed IDPs had no choice but to stay in their area of displacement. Factors forcing continued displacement were often related to the lack of safety and damaged properties in the area of origin. Continuing to address challenges faced by IDPs is crucial as more than six million people remain internally displaced in Syria.

Durable solutions for the future – whether in displacement or back home

A key component of the report was the notion that a returns process does not end in the act of arriving back home, but requires finding ways that will enable returnees to reintegrate, live in safety and rebuild their lives. Returnees indicated that upon return various priority needs were not met, such as access to basic services and sustainable housing. Meanwhile, safety and stability were of concern as several respondents noted the fear of renewed violence and new waves of displacement. Another topic that will demand further scrutiny is the potential of achieving durable solutions for those without the choice, capacity or desire to return home.

Despite the political uncertainty and lack of clarity on what the future holds for north-east Syria and the country as a whole, long-term thinking beyond humanitarian responses is required to tackle the protracted nature of displacement. In the short term, humanitarian actors could explore cross-sector collaboration to support those remaining in displacement, whilst continuing to monitor protection risks for returnees. These collaborations could incorporate resilience-building and early recovery components, such as demining and mine-risk education as well as supporting housing, livelihood opportunities, land and property rights and civil status documentation. These could act as stepping stones in supporting households’ progress towards durable solutions in the long term.

To learn more, have a look at the  Picking up the Pieces: realities of return and reintegration in north-east Syria and visit IMPACT Initiative’s website on www.impact-initiatives.org. REACH is a joint humanitarian data and information initiative of IMPACT, its sister-organisation ACTED, and the United Nations Operational Satellite Applications Programme (UNOSAT).