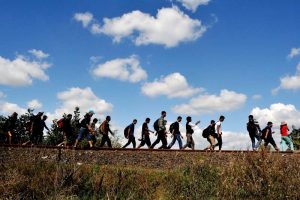 Since the autumn of 2015, over half a million people migrated to Europe via the Western Balkans, most having sought asylum in countries across the European Union (EU). The vast majority of migrants travelled to Europe via Turkey, Greece and the Western Balkans. The once fluid migration route changed significantly in February, following the introduction of successive new policies and border closures, culminating in implementation of the EU-Turkey Plan, which effectively closed all borders along the Western Balkans route.

Building on a rapid assessment at the peak of migration in September 2015, REACH conducted a six month study of migration trends in the Western Balkans. Using primary data collected through group interviews with migrants, the study sought to provide detailed and actionable information to humanitarian actors and policy-makers, focussing on the demographic composition and motivation of migrant groups.

Most migrants have come from conflict-affected countries – predominantly Syria, Afghanistan and Iraq – and many are educated with previous experience of stable employment. They left home because of active conflict or insecurity, commonly triggered by a recent deterioration of the situation. The proportion of groups with more vulnerable migrants has increased over time, with growing numbers reporting they had already lived in another location for more than three months, either as a refugee elsewhere or having stopped en route in order to finance the remainder of their journey. Of particular concern were frequent reports of unaccompanied minors. Present in 18% of all interviewed groups, and in up to 50% of Afghan groups, significant numbers of unaccompanied minors have gone unidentified by authorities and face particularly acute risks in transit.

Most crucially, the report highlights the consequences of changing border policies and the EU-Turkey plan on the vulnerability of migrants. While these policy changes have led to a dramatic decrease in the number of new arrivals in Europe; those continuing to travel have been exposed to far greater risks: either left stranded along the Western Balkans route, or continuing the journey by other illegal routes, where they are more vulnerable to physical violence, trafficking and exploitation.

Continued assistance is required at several levels to address the humanitarian needs of crisis-affected populations: in transit, upon arrival, and in migrants’ areas of origin, where some of the most vulnerable community members were forced to remain behind. Migration to Europe has remained very dynamic, highlighting the need to continue monitoring migration in the future, both to inform humanitarian responders of changing needs, and policy makers of the implications of their actions.

To read REACH’s analysis and recommendations in the full report, click here.

Photo: Migrants walking along a railroad, crossing from Serbia into Hungary. Credits: UNHCR