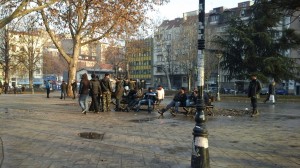 Despite harsh weather conditions and rough seas, UNHCR estimates that more than 80,000 refugees and migrants arrived in Europe by boat during the first six weeks of 2016, a figure which already exceeds that of the first four months of 2015. Consequently, EU countries have been discussing and implementing policy changes in response to this large scale migration. In this context, REACH, with the support of the European Union Humanitarian Aid and Civil Protection department (ECHO), put in place a displacement monitoring mechanism to assess the trends and profiles of new arrivals into Europe through the Western Balkans. The current migration flow transiting through the Western Balkans mainly originates from Syria, Iraq and Afghanistan through Turkey, with asylum seekers reaching the EU through Greece.

Through this assessment REACH found that of the groups interviewed in January, 42% were from Syria, 26% from Iraq and 21% from Afghanistan. The remaining 11% originated from Algeria, Morocco and other North African countries – indicating an increase in visibility of non-preferred nationalities, despite the introduction of tightened border controls that seek to deter them. Whereas, families were still more prevalent among travelling groups, the percentage of men travelling alone/without family appeared to have increased since December – a finding particularly true for groups travelling from non-preferred nationalities. Interestingly, 74% of groups from Afghanistan, Syria and Iraq contained members who had left family behind in their area of origin, a decrease from 91% in December.

In terms of final destination, Germany remained the most popular, and family reunification increased as a deciding factor for choosing the final destination. Sweden’s popularity among migrants appears to have decreased compared to December. REACH also found that push and pull factors were primarily influenced by area of origin, indicatively active conflict and insecurity were the main drivers of migration for Afghans, Iraqis and Syrians. For non-preferred migrants, a lack of job opportunities was the main driving force for migration. In terms of migrant profiles, people traveling from Iraq and Syria were generally better off financially than those travelling from Afghanistan.

Most migrants travelled directly from their country of origin – 93% of Syrians reported travelling directly from Syria. While travel through the Western Balkans is relatively quick for migrants from Syria, Iraq and Afghanistan, migrants in transit reported delays of 2-7 days – most commonly reported at the border crossings between Greece and FYRoM, and between Serbia and Croatia. REACH also found that people of non-preferred nationalities are much more likely to be refused entry at the border crossings once in Europe. The increasing proportion of groups that are ‘stranded’ in transit has implications for humanitarian aid actors, as they will develop different sets of needs to those transiting or experiencing short-term travel delays, instead requiring access to longer-term accommodation and bathing facilities.

In coordination with its partners, REACH will continue to monitor migration to Europe over the coming months in order to inform and support humanitarian stakeholders operating in areas of origin and transit as well as policy makers in the EU. To read the full January Situation Overview, click here.

Image: Migrants wait on a bench in Belgrade.