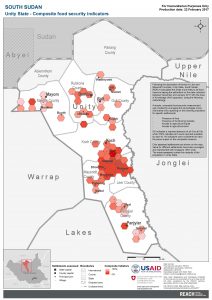 Since May 2016, over half of the populations assessed by REACH in Unity State, South Sudan, have regularly reported that they do not have sufficient access to food. REACH data from January 2017 shows an increase of this figure to 84% for assessed settlements in Leer County and 76% for assessed settlements in Mayendit County. On 20 February 2017, the UN declared a state of famine in these two counties of Unity State. This is the first time a famine has been declared worldwide since 2011.

Long-term findings from REACH (through data collected on a monthly basis since January 2016) highlight that the ongoing conflict coupled with the country-wide economic crisis has caused high levels of food insecurity in Unity State, decreasing access to markets, land for cultivation, and to food assistance. This has impacted community resilience in both Leer and Mayendit Counties, as well as in Koch County, which has been classified as likely to experience famine in the near future.

Many people from Leer and Mayendit Counties have been displaced by conflict and can no longer access their land to cultivate or harvest food, much of which has been stolen or destroyed in the course of fighting. The impact of the conflict on cultivation has been further exacerbated by flooding or heavy rains that destroyed some crops during the 2016 cultivation season. Humanitarian access has been extremely limited by insecurity until very recently, making it difficult to conduct general food distributions in many highly food insecure areas, particularly in Leer. As a result, much of the population in the affected area has resorted to coping mechanisms such as foraging for wild foods (mainly water lilies) and skipping meals, with deaths related to hunger being widely reported.

Recent findings on food insecurity in Unity State have been published in the REACH Situation Overview of Unity State for December 2016, which can be accessed at this link.