Between March and May 2015, in partnership with the World Food Programme (WFP), REACH conducted a nationwide Comprehensive Food Security Monitoring Exercise (CFSME) to evaluate the level of food insecurity among registered Syrian refugee families living in Jordan. Over 5,000 interviews and 22 focus group discussions were conducted to provide a robust understanding of food security and economic vulnerability of registered Syrian refugees. The full assessment report is available here.

Comparing with the CFSME 2014, there has been a dramatic increase in the vulnerability and food insecurity of registered Syrian refugees living in Jordan over the past year. In 2015, 85% of households in both the camps and host communities are either food insecure or vulnerable to food insecurity – a severe drop since 2014. In host communities only 15% of refugee households are food secure in 2015, down from 52% in the previous year. Further, 68% of households are now living below the absolutely poverty line, compared to 44% in 2014,  and households are increasingly adopting negative coping strategies such as accepting exploitative work conditions and reducing essential non-food expenditure, including education. An overview of the main findings from this exercise is available here.

In 2014, WFP assistance sustained food security of Syrian refugees in host communities and camp through monthly distributions of food vouchers. However in December 2014, due to limited funding, WFP was forced to decrease the value of the monthly vouchers for Syrian refugees in the host community. This decrease had a dramatic impact on refugees, with no evidence to suggest that households were resilient towards these challenges, and such impact was reflected in the findings of this assessment. In light of the already concerning current situation, the humanitarian community in Jordan reacted with widespread concern to the WFP announcement that food assistance could no longer be provided at all to refugees in the host community starting from 1st August 2015, unless additional funding is secured. The deteriorating situation has been followed by international media, with a recent feature in the Independent.

As vulnerability increases and overall funding for the Syria response continues to decline, this study will play a crucial role in identifying current trends and needs of Syrian households to inform targeting, programming and advocacy. Particularly in the coming months, as food assistance is reduced, the CFSME findings will inform efforts to ensure that the most vulnerable households continue to be supported with the aim to mitigate increasing hardship for registered Syrian refugees living in both the host communities and refugee camps in Jordan. 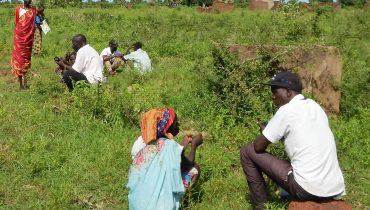 Food insecurity continues to worsen across South Sudan despite ongoing humanitarian efforts. According to the latest IPC release, as of January 48% of the South Sudanese population, 5.3 million people, are facing Crisis and Emergency (IPC Phases 3 and 4) acute food insecurity. Over 1 million people are in Emergency Phase, a 40% increase since […]