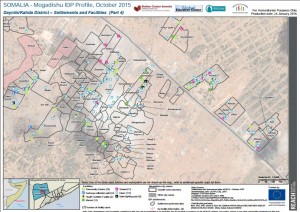 For over two decades, Somalia has been in a state of complex humanitarian crisis, with socio-economic, political and environmental factors leading to widespread conflict, drought, more recently flooding and numerous other recurrent human and natural disasters. The situation has been made worst lately by increased insecurity and volatile population movements experienced since March 2014. This rise in conflict across the country, in conjunction with widespread environmental hazards, has left the majority of Somalia’s 12.3 million people chronically or acutely vulnerable. Today, according to UNHCR, about 4.9 million people are in need of humanitarian assistance as of September 2015, and over 1.1 million people remain internally displaced.

To address this, REACH provided support to the WASH, Shelter, Education and Protection Clusters, in in collaboration with DCR and JIPS, by conducting an assessment of informal Internally Displaced Persons (IDPs) settlements in Mogadishu, Somalia. Because there are no formal IDP settlements within Somalia, settlements were found to be interspersed with host community members, refugees, economic migrants, and host community households. REACH assessed 16 zones of IDP settlements between August and December 2015.

Through information based on a full household enumeration and 2, 696 mapped facilities, REACH found that Daynile, one of the 16 zones assessed, hosted 142 settlement and 18, 467 households. The mapping of the facilities was conducted by REACH through direct observations, facility management interviews and collection of GPS coordinates. The household data was collected with support from IOM, DRC, NRC, UNHCR, Save the Children, HINNA, Elman, DBG, DMA, BRA, UNICEF, UNOCHA, SSWC, Mercy Corps, Concern and ORDO.

Overall, the information in these factsheets was collected on behalf of the humanitarian community in order to better understand the needs, vulnerabilities and intentions of IDPs in these communities. To access all 16 factsheets visit REACH’s Resource Center here, or click here for the Daynile. To access all products click here.