The Central African Republic is home to the third largest humanitarian crisis in the world. Over half of the population is in need of humanitarian assistance, and 1.7 million people are in a severely precarious situation. Violence against civilians, and humanitarian workers, is still high. Combined with the extremely limited amount of paved roads, and infrastructure generally, Central Africans continue to endure the many nefarious effects of a complex and severe humanitarian crisis. Yet for the first time in the country, and in spite of significant logistical and security challenges, a multi-sector needs assessment has been conducted to respond to the crisis in a targeted, prioritized and effective manner.

According to the REACH Country Coordinator in the Central African Republic, Paul-Antoine Chataing, “the crisis response here has always suffered from a major lack of reliable and comprehensive information on the needs and vulnerabilities of affected populations. Whilst there were some scattered evaluations on certain sectors that existed, there was no nation-wide evaluation that enabled multi-sectoral analysis in any way.”

This sentiment is echoed by OCHA’s yearly flagship publication the Global Humanitarian Needs Overview which cites in its segment on Central Africa that “the 2020 HPC is underpinned by the largest humanitarian data collection exercise in CAR since 2016, notably thanks to a multisector needs assessment (MSNA) that covered about 9,000 households in more than 500 localities across all sub-districts”, referring to the REACH MSNA. 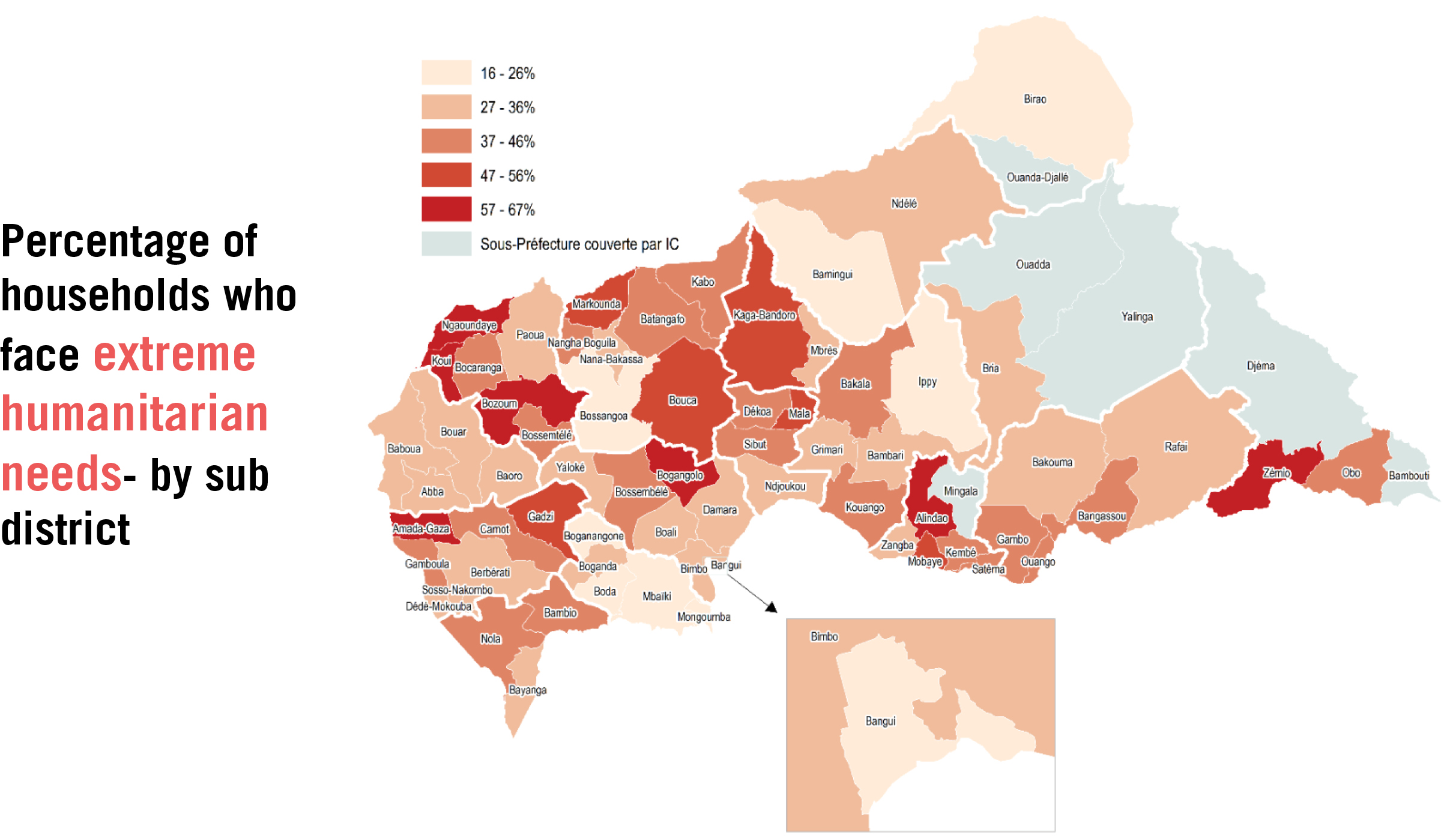 Map extracted from the REACH Multi-Sector Needs Assessment conducted in the Central African Republic shows the widespread impact of the crisis, where all sub-districts harbor a percentage of households with extreme humanitarian needs.

What does this new, more detailed, and comprehensive, level of information tell us about the actual situation of populations affected by the crisis?

The implementation of the political agreement in February 2019, once a hope for solving communal violence, has been patchy and armed groups still hold sway in much of the country. According to the MSNA’s key findings, 49% of assessed households fear for their security. Further scrutiny of data from the MSNA shows that whilst the vast majority of displaced families flee due to insecurity, the few who return do not do so because of an improvement in security, but rather to reunite with family.

A simple glance at the Rapid Response Mechanism, another rapid assessment coordinated by UNICEF and supported by REACH in the region, shows that Central African citizens are still the victims of many shocks linked to violence, and displacement. Moreover, in 2019, 306 security incidents affected humanitarian workers, including 5 humanitarians killed and 42 injured. Paul-Antoine reflects that “with our 25 vehicles circulating the territory and our 13 assessment teams deployed, perhaps we were lucky to not have encountered any issues.” Yet there is rampant fear, shared between humanitarians on the ground and Central African citizens alike, that renewed clashes like the ones witnessed in Bria and Birao in September 2019, will continue to erupt across the country with the upcoming elections.

The annual fact-sheets from the Rapid Response Mechanism show the amount of alerts from 2019. It also shows the extent to which returning populations and violence caused the most alerts.

Insecurity is a key factor driving displacement in the Central African Republic. The MSNA shows that 93% of displaced households have reported fleeing their areas of origin out of fear for their security. Given that insecurity is quasi-rampant in CAR outside Bangui, the displacement figures are staggering. In total, one fifth of the population has had to flee their home to survive the eruption of violence. Refugees from CAR are estimated at a total of 611,338, with nearly half having fled to neighboring Cameroon. The estimated number of Internally Displaced Persons is even higher (681,708.)

Violence, as well as poor infrastructure, is also compounding issues related to the access of basic services, and humanitarian aid. “The general lack of access linked to insecurity and poor infrastructure has multi-sectoral consequences on the living conditions of Central Africans. Affected populations lack adequate access to water, education, healthcare, and in some isolated communities, humanitarian aid. This is not limited to areas where conflict has erupted, but vast parts of the country” explains Paul-Antoine. With less than 2.5 per cent of the road network in the country paved, and many communities living in isolated hard-to-reach areas, leading a large-scale assessment such as the MSNA tested the capacity of REACH teams to overcome serious logistical challenges.

Key findings from the MSNA speak for themselves in terms of highlighting why collecting this information was crucial. Based on the calculation of the Multi-Sectoral Needs Index (MSNI) 94% of assessed households face severe or extreme humanitarian needs:

Given the extreme uncertainty linked with the coming year in CAR, and the clear need to improve the relatively low existing level of information concerning Central African’s needs and vulnerabilities, REACH will be facilitating a second round of the MSNA in the coming months in order to continue informing and improving the humanitarian response.

The full catalogue of REACH information products published on the Central African Republic can be accessed on the Resource Centre.