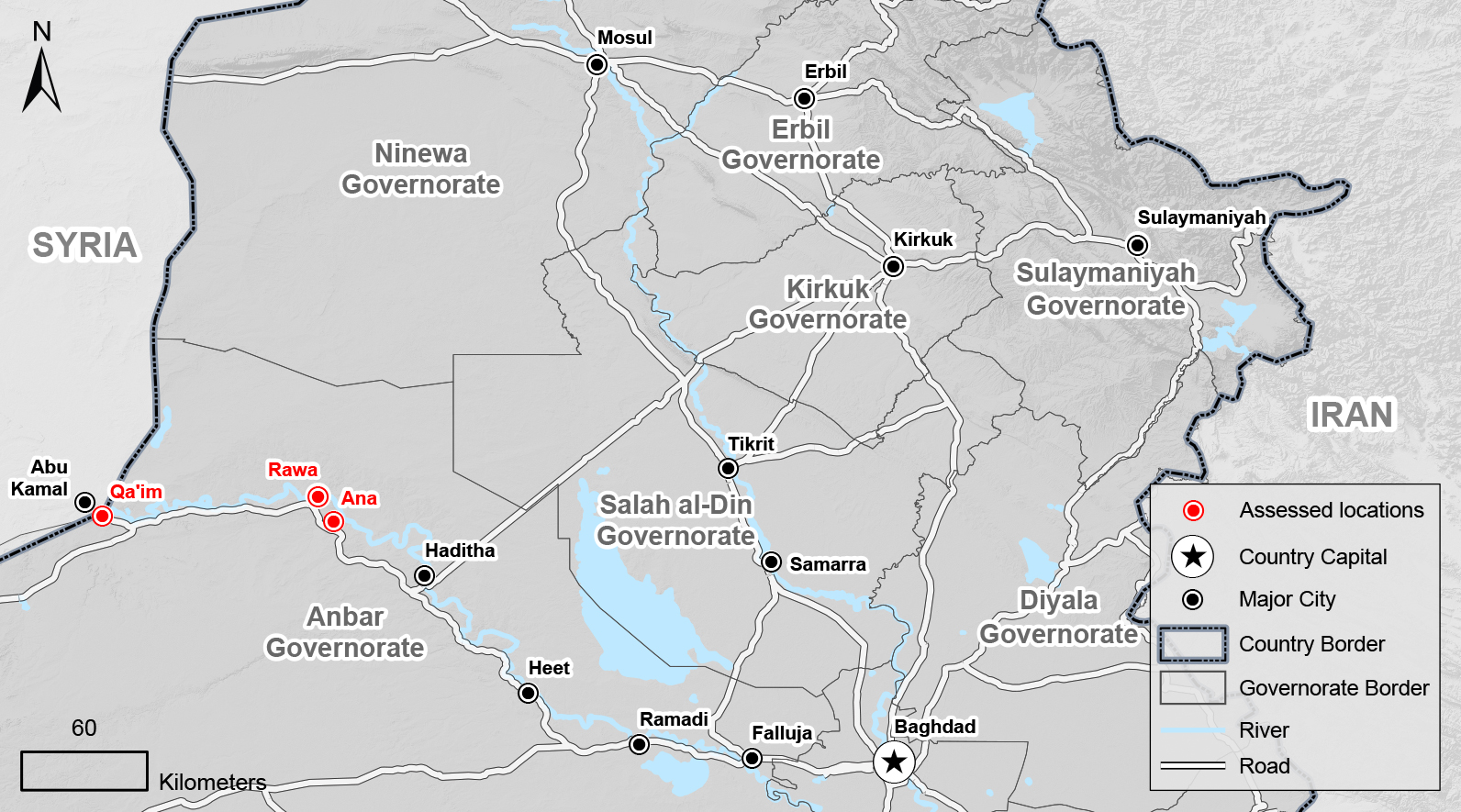 Around 115,000 residents have approximately returned to Ana, Qa’im and Rawa since the government of Iraq re-established control in western Anbar. ©REACH/2018

The rule of the so called Islamic State or IS over the past four years resulted in the displacement of almost six million Iraqis. Since the government of Iraq announced victory over the group in December 2017, the country has seen almost four million people return to their area of origin. To help inform humanitarian programming and support durable and safe return processes, REACH, in partnership with the Returns Working Group, is conducting Rapid Overview of Areas of Return assessments in locations where there is a scarcity of publicly available, up-to-date information. The so called ROAR assessments provide insights to what motivates return, along with an overview of the situation in each assessed area in light of protection issues, livelihoods and the provision of basic services.

Ana, Qa’im and Rawa are all urban centres in the west of Anbar governorate, situated on the banks of the Euphrates river in close vicinity to the Syrian border. The area was held under IS rule from June 2014 until the end of 2017, during which thousands fled their homes. According to estimates, more than 65,000 people were displaced from the region in 2017 alone, yet returns quickly began in 2018. Based on the findings by REACH, approximately 115,000 people have now returned to Ana, Qa’im and Rawa.

The findings by REACH noted that all three locations shared the same key pull-factors when it came to the return of displaced populations; improvement to safety followed by the high living costs in displacement. Those remaining displaced highlighted that they did so due to the lack of basic services and livelihood opportunities in their area of origin. Another deciding factor motivating the displaced to remain in their new location was the damaged to or destruction of property back home.

Reasons given by internally displaced people or IDPs from Ana, Qa’im and Rawa for not returning to their area of origin.

In spite of perceived calmness, the assessments found that improvements in safety were yet to translate to the provision of adequate services in the assessed locations. REACH found that only basic healthcare services were available and informants underscored a lack of specialized staff, medication and equipment in healthcare centers making treatment partly inaccessible. Children reportedly had access to formal education, but the number of functioning schools, teachers and materials were noted as insufficient.

Regarding questions on protection, informants indicated that families with perceived affiliation to IS faced barriers in return, both due to the fear of retaliation and due to local authorities not providing them with the clearances needed for return. In addition, explosive hazards, such as mines, were indicated to still be present in Rawa town and in all the assessed areas. This was additionally tied to limited livelihood opportunities in agriculture as farmland had reportedly been left fallow due to the risk of explosives remaining in the lands. The stagnation of agriculture was furthermore linked to the lack of basic services, such as electricity, water and equipment, providing an example of the holistic nature of factors and conditions affecting a feasible returns process.

For a more comprehensive overview of findings from the assessments, please visit Iraq’s page on the REACH Resource Centre and read the full reports on Ana, Qa’im and Rawa.