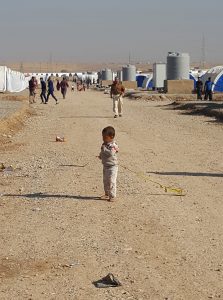 Almost four months after the Mosul offensive began in mid-October 2016, the dynamic in and around Mosul City has changed significantly. Since 18 January 2017, East Mosul has been entirely retaken from armed groups, resulting in improved security conditions and greater access to humanitarian assistance. Nevertheless, the West Bank and many surrounding villages in the Tel Afar region remain under the control of armed groups. In such areas, the delivery of humanitarian assistance has worsened as primary trade routes have been cut, while civilians struggle with few to no livelihood opportunities and rising food prices.

REACH’s latest Mosul Crisis Overview highlights the most recent trends in displacement, intentions and needs following the renewed offensive from 29 December 2016 until mid-January, and the subsequent increase of returnees to East Mosul until 13 February 2017. This situation overview is based on data gathered by REACH in January through 199 Key Informants, combined with review of secondary data sources.

Findings indicate that while most residents of Mosul and surrounding areas stayed put during the military offensive, an estimated 33,200 families (199,200 individuals) have been displaced as a result of the conflict – primarily from Mosul district – of which roughly 77% currently remain displaced and live primarily in 10 emergency camps and sites. The remaining 23% have returned to their area of origin in East Mosul City or retaken villages since mid-January. In line with the previous Mosul Crisis Overview, available demographic data indicates that the majority of the displaced population from Mosul and its surroundings are minors, both in- and out of camp settings. Specifically, data collected on informal sites indicates that 63% of the population was under the age of 17 with more than 50% of these under the age of four.

While conditions in emergency IDP camps continue to raise concerns, humanitarian needs remain highest in Mosul City and surrounding areas, most especially those still under the control of armed groups, such as West Mosul City and villages in the Tel Afar region. Overall, REACH assessment has identified a primary concern in the lack of livelihood opportunities across all assessed areas, which has resulted in a severe lack of cash hindering affected populations’ capacity to meet their most basic needs, including food and healthcare. On top of this, the significant increase in the number of returnees to East Mosul City and surrounding villages is also indicated as an element of concern as security conditions remain volatile, creating protection risks for these population groups.

REACH will continue to conduct regular assessments of the situation in Mosul City and surrounding areas in order to support an evidence-based humanitarian response.