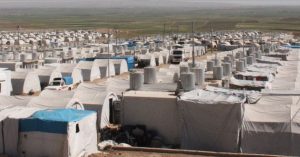 The current Iraqi internal displacement crisis originated with conflict in Anbar governorate between Armed Groups and the Iraq Security Forces in late 2013, rapidly spreading to Ninewa and other central governorates of Iraq in June 2014. The spread of insecurity led to large scale displacement with nearly 3.5 million internally displaced persons (IDPs) identified across Iraq and 322,346 individuals registered in the 59 formal camps in Iraq as of April 2016.

To monitor these camps comprehensively and inform a more effective humanitarian response, REACH and the CCCM Cluster have been conducting Quarterly IDP Camp Profiling that aims to provide regular and updated information on developments, needs, and gaps in all accessible IDP camps across Iraq. Round V of the Quarterly IDP Camp Profiling round was conducted in April 2016, during which REACH assessed 36 formally recognized IDP camps across Iraq.

Key findings from the April round of data collection indicate that access to livelihoods is a significant issue for many IDP households residing in camps: 34% of households reported that no household members had earned an income in the 30 days prior to the assessment. Medical supplies and access to healthcare was also reported as a growing need. Throughout the camps, 55% of households reported needing healthcare treatment in the 30 days prior to the assessment; representing an increase of 33% compared to September 2015.

Findings were disseminated by the CCCM cluster and REACH  in the form of a Quarterly IDP Camp Directory, which includes individual camp profiles and camp infrastructure maps for each assessed camp. The profiles include key sectoral findings in relation to core CCCM and SPHERE standards; information collected from camp management and updated infrastructure maps.

This project provides key information on IDP camps in Iraq at an operational and strategic level. Humanitarian actors and decision makers can use the findings for planning, sector prioritization and programme development. To access the full directory, click here.