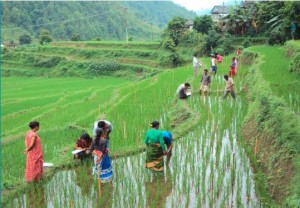 On the 25th of April 2015, a 7.8 magnitude earthquake struck Nepal with its epicentre in Gorkha district, approximately 81km northwest of Kathmandu, causing widespread damage to homes, land, infrastructure and livelihoods, and affecting millions of people across 39 out of 75 districts. The Nepalese government categorized 14 of these districts as severely affected: Dhading, Gorkha, Rasuwa, Kabhrepalanchok, Nuwakot, Dolakha, Sindhupalchok, Kathmandu, Ramechhap, Bhaktapur, Lalitpur, Makawanpur, Sindhuli and Okhaldhunga. Combined, over five million people reside in these districts.

Following the initial earthquake, and amid ongoing emergency relief efforts, Nepal was struck by a major aftershock on the 12th of May 2015, registering a magnitude of 7.4 on the Richter scale. According to government estimates, the earthquakes combined caused over 8,790 casualties and 22,300 injuries, and left over 500,000 houses and hundreds of historical and cultural monuments destroyed. It is estimated that the earthquakes affected the lives of approximately eight million people, almost one-third of the population of Nepal.

In response to this, REACH facilitated a joint food security assessment in collaboration with the food security cluster and a range of partners which included the UN’s Office for the Coordination of Humanitarian Affairs (OCHA), World Food Programme (WFP), Food and Agricultural Organisation (FAO) of the United Nations, the United Nations Development Programme (UNDP), the Early Recovery Cluster, the Nepali Red Cross and the Government of Nepal in 11 of the severely affected districts. The assessment was conducted over the course of September and October 2015, and was designed both as a monitoring exercise and to further inform broader early recovery efforts identified as priorities in the Post-Disaster Needs Assessment, including food security, livelihoods, agriculture, service access and protection.

The key findings identified that more than a third (37.3%) of households were reportedly hosting vulnerable individuals. In terms of food security, market availability of food items has generally increased since May, seeing more than 90% of surveyed households reporting increased availability of cereals, pulses, vegetables and oil in their nearest food market. However, an estimated 78.9% of households reported holding debt, with a quarter of all outstanding debt being accumulated in the six months following the earthquake. In terms of protection, 38.9% of the households surveyed reported that they did not possess citizenship and/or identification documentation, potentially due to loss or damage as a result of the earthquake.

Overall, this assessment provided crucial information for the planning and implementation of early-recovery efforts by a large variety of partners. Crucial to the success of this assessment has also been the active involvement of a variety of partners in the assessment design, implementation and analysis, including UN Agencies, the Nepali Government and NGOs. The involvement of all key responders throughout the process has ensured a strong ownership over the assessment findings and a thorough integration of assessment results in the cluster- and organisation-specific planning of future responses in Nepal.