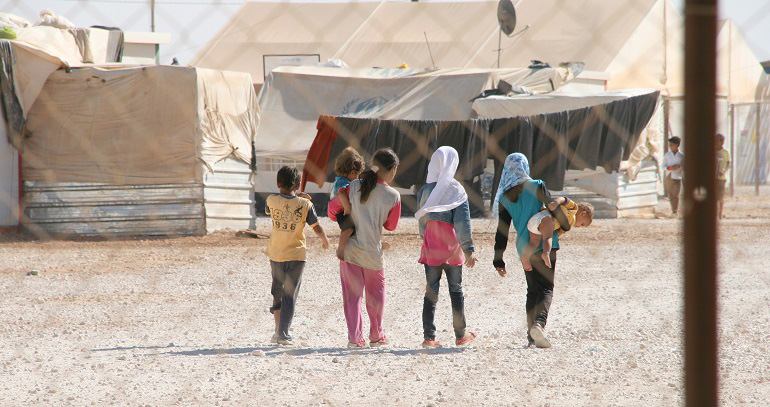 On a global scale, women and girls make up half of the world’s refugees and half of global migrants, but when it comes to those travelling to Europe, the story is quite different. On International Women’s Day, REACH tells the story of one of the many mothers, sisters, and daughters who do not or cannot migrate and are left behind, alone or within broken families.

Read the original post on the Mixed Migration Platform Blog.

Nour’s husband and 10-year-old daughter left Jordan for Europe in October 2015, just a month after she gave birth to their youngest child. They wanted to travel together but Nour was still weak following the delivery and they decided that the journey was too dangerous to risk leaving with four small children. In any case, they assumed that family reunification would be quick and they would soon be able to travel in a safe and legal way.

A year and a half later, Nour remains a refugee in Jordan with her three youngest children, while her husband and daughter are in Sweden. Both have been granted asylum, but the family reunification process has been much slower and more difficult than they imagined. “The journey was very hard” she explained, “After arriving in Sweden, my daughter didn’t speak for three months due to the shock.” Time spent apart under challenging circumstances has caused her relationship with her husband to suffer, and the high volume of applications means that family reunification is unlikely before 2018. “I still think it’s viable to come to Europe, but now I realise it might take years”.

When families decide to migrate, women and girls are much more likely to be left behind. In 2016, just under a third of asylum applicants to European countries were female, underlining this imbalance. Far away from the media on Greek and Italian shores, we know much less about the experiences of the women and girls who stay than we do about those who make the journey.

This International Women’s Day, Nour’s story is an example of the challenges faced by some of the mothers, sisters and daughters who do not, or cannot travel. Her story was one of many collected by REACH as part of ongoing research for the Mixed Migration Platform into the experiences of separated families in Jordan, Lebanon, Iraq, Afghanistan and Syria. The project tried to answer several questions – what makes some family members travel while others stay? To what extent are migration decisions made individually or jointly? And how are those left behind affected by migration?

The research found that those who remain often face considerable challenges due to debt, reduced income and interrupted access to humanitarian assistance. Displaced families like Nour’s are among the most vulnerable, especially when the main breadwinner or head of household leaves.

For those who hope to reunify, the situation can be harder still, since changing policies, slow processing times and limited information mean that even families who qualify for such schemes often fail to adequately prepare for the time it takes. Of the 90 families interviewed for the study, only half made any contingency plans at all to look after those left behind. Nour’s family was one of the few that did, but like many, their meagre preparations – paying a month’s rent up front before her husband left – were nowhere near enough. Eighteen months later, reunification is still long way off and Nour has no work and three small children to care for. Her only source of income is humanitarian aid, and even this was problematic at first, since both food vouchers and cash payments were registered in her husband’s name. At first, she was cut off from assistance for five months – two before she realised that she needed to re-register as the household head, and another three while the change was being processed.

In some ways, Nour was lucky – despite being a refugee, she had other family members in Jordan that she could turn to for support. After selling her furniture to pay the bills, she had nothing left and eventually moved in with her brother. The separation has been incredibly tough for the whole family, but she insists that they made a joint decision, taking into consideration the risks to their children. “I encouraged him to migrate, hoping it would get us a better life” she explained. “Until now it’s been a very negative experience – I would not recommend to anyone to take this gamble…Currently there have been no positive changes. Only later, when we reunify will it be positive”.

The study on Separated Families: who stays, who goes and why, conducted by REACH for the Mixed Migration Platform, will be published in the coming weeks. For further information, please contact: admin@mixedmigrationplatform.org or geneva@reach-initiative.org.

The migration experience of women has also been analysed in REACH’s latest briefing paper for the Mixed Migration Platform, Women and girls on the move: A gender analysis of mixed migration from the Middle East to Europe, accessible at this link.