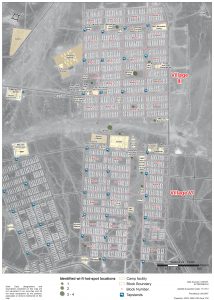 Efficient distribution of information to beneficiaries is a critical part of effective aid provision. This is clear in Azraq refugee camp, where humanitarian organisations communicate regularly with the 36,225 Syrians currently residing there. In order to better understand and improve communication methods in the camp, REACH partnered with UNHCR to conduct the first Azraq Mass Communications Assessment last year. The assessment identified the most frequently used information sources as well as barriers to communication and levels of access to media.

Findings make it clear that Azraq residents are staying connected and mobile phones are playing a critical role. 78% of respondents reported access to a smart phone, and phones are the primary means through which internet is accessed from home. Accordingly, most camp residents can receive information through SMS text messages – and they do; texts (24%), followed by leaflets (23%) and posters (8%), is the top way in which camp information is formally disseminated.

Refugees in Azraq are not only using phones to keep track of camp affairs. Access to the media is similarly crucial to maintain communication with friends and family, stay informed of developments in Syria, and monitor changes to resettlement policies. Social media platforms like Facebook and WhatsApp provide the most frequently used media source in Azraq camp, with 45% of respondents citing their use.

Of course a phone doesn’t achieve much without a charged battery. The current absence of electricity in households therefore creates a prominent barrier, contributing to a perceived inadequacy of media access. Lack of electricity was cited as the top reason for that inadequacy (96%), followed by no financial means to purchase internet technology (70%) and limited internet access (35%). REACH and UNHCR proposed several key recommendations meant to mitigate these challenges, including the installation of Wi-Fi hotspots in central locations and expanded access to charging stations until an electricity network is implemented.

As Azraq camp continues to grow and evolve, the Mass Communications Assessment will inform key upgrades to existing technology, guide organisations seeking to convey information in an efficient manner, and ultimately enhance communication within, to, and from the camp.

REACH and UNHCR conducted a participatory mapping exercise during focus group discussions to identify the most frequently suggested locations for Wi-Fi hotspots in Azraq camp. To read the full report click here.