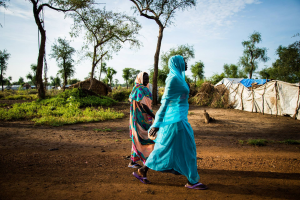 Since October 2015 a large influx of internally displaced persons (IDPs) crossed the Nile to reach Mingkaman from neighbouring Jonglei State. In November and December, new arrivals came following attacks which took place on the 17th of November, targeting civilian populations and government and NGO assets in Jelle and Parker Payams, Twic East County, Jonglei State. Estimations of the number of IDPs arriving in Mingkaman during this period varied between 5,000 and 41,000. To address and investigate this sizable variance in estimates, REACH conducted a rapid population count in Mingkaman Spontaneous Settlement.

To quantify recent population change, REACH asked households about the average number of people who slept in their shelter during November and during the week of 6 – 13 December 2015, and whether they expected other relatives to arrive. To compliment these household findings, REACH conducted focus group discussions to better understand displacement trends, reasons for leaving area of origin, means of travel, and the possibility of future arrivals to Mingkaman site.

The last population count, conducted through IOM’s biometric registration, took place in February 2015 and showed a population of 71,652. REACH found a total population of 52, 942 in the established Mingkaman Spontaneous Settlement, 12,019 were reported to have arrived between 13 November and 13 December 2015. This estimate included only the population of the established site and not newly settled surrounding areas. REACH found that the primary areas of origin of new arrivals were Twic East County and Bor South County. Those arriving from Twic East County fled the violent attacks which took place in November, in search of safety and aid. Those coming from Bor South County travelled in search of humanitarian aid; many of these also had relatives or friends already in Mingkaman. REACH also found that 60% of households at the site were expecting new arrivals from both Bor South County and Twic East County in January 2016.

The primary objective of this population count assessment was to develop an estimate of the population in the Mingkaman Spontaneous Settlement, in order to help humanitarian aid actors better understand the size of the population in Mingkaman and the scale of recent and expected in-migration This project is providing timely and critical information to those actors implementing the response. For more information, read the full assessment here.