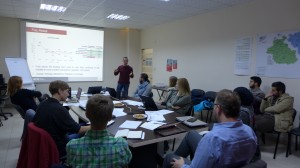 During 2015, the Cash Based Responses Working Group (CBR), with the support of REACH, has been monitoring prices in Syria’s northern governorates of Idleb, Lattakia, Aleppo, Hama, Ar- Raqqa, Deir ez-Zor and al-Hasakeh. 11 partners contributed resources to this initiative, collecting data on a monthly basis in over 40 sub district. As a result of 6 months of periodic data collection, REACH has just released a report outlining trends related to market access, prices, availability, and supply chains over time and across locations, which was presented during the latest CBR working group in Antakya, Turkey.

Through this assessment, REACH aimed to link local conditions with broader macroeconomic trends, but variations in coverage meant that it was not possible to make consistent comparisons in and across sub districts. REACH found that markets inside Syria showed resilience in the face of the current protracted conflict. Over the past six months, markets did not have restocking issues in essential commodities and food items. And when shortages did happen, it only took a few days for additional stock to be sourced. This was found to be the case even during periods where specific active conflict related events, such as aerial bombardments and military operations, took place.

Despite the overall cost of the items included in the monthly Market Monitoring Exercise rising over the past six months, REACH found that there was a variation amongst individual commodities. The average price of the Survival Minimum Expenditure Basket (SMEB) rose 24% (6,464 SYP) since June, despite the equivalent cost of the SMEB in dollars, which decreased 2.3%, indicating that the increase in prices did not keep pace with inflation. Geographically, Deir ez-Zor reported markedly higher SMEB prices for the months of October (35,841 SYP; 105.73 USD) and November (41,601 SYP; 110.35 USD) 2015.

The main objectives of this exercise was to take stock of the information collected to date and to consider information gaps to be filled in future rounds of the Market Monitoring Exercise or through other assessments. One of the key observations from this report relates to the heavy focus on traders, and the need to collect additional information from consumers moving forward, in order to gain a fuller picture of market functionality. To read the full report click here.