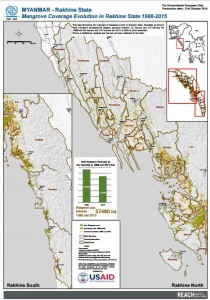 Myanmar’s coastal state of Rakhine is prone to multiple natural hazards and people’s vulnerability to these hazards is further exacerbated by weak infrastructure and chronic underdevelopment. Against this background, the Program for Increased Disaster Management and Resilience Against Natural Disaster (IDM-RAND) was launched in 2014 as a consortium of organisations led by International Organisation of Migration (IOM) and comprising ACTED, Swanyee Development Foundation and Asian Disaster Preparedness Centre. In a secondary review conducted at project inception, IDM-RAND found that despite evidence of widespread and accelerating encroachment of Rakhine’s mangrove forests, management of this critical resource is only weakly integrated into Disaster Risk Reduction (DRR) programming in the state. Moreover, weaknesses and contradictions persist in the existing evidence base regarding drivers of mangrove degradation, existing levels of mangrove coverage in the state and rates of change over time.

Since well-managed mangrove areas can both reduce people’s exposure to natural hazards and provide a sustainable base for livelihoods, IDM-RAND will work to advocate for ecosystem-based DRR approaches with the government, civil society and local communities. In order to support this process and fill the gaps mentioned above, REACH conducted a Socio-Ecological Assessment of mangrove areas in northern Rakhine state, in the townships of Sittwe, Pauktaw, Minbya and Myebon. The assessment aimed at investigating the major trends and drivers of change affecting the current status of mangroves in the aforementioned townships. In support of this study, a remote sensing analysis of mangrove coverage in 1988, 2000, and 2015 was also conducted by UNOSAT.

Findings reveal an alarming rate of loss in Myebon and Pauktaw townships wherein 22 and 43 percent of mangroves were lost over the course of the reference period. Meanwhile, by 1988, Minbya and Sittwe had already lost most of their mangroves and in fact experienced modest gains during the reference period. Findings indicate that the major causes for mangrove degradation over the past 30 years include ambiguities over land tenure and corruption, an overall increase in areas under shrimp and rice farms, firewood collection, cumulative impact of natural disasters as well as the repercussions of recent conflict. Those most affected by the degradation include fishers and shrimp farmers who have experienced a serious decline in their primary means of livelihoods. In addition, partly due to deforestation, villagers in the area are now more exposed to the threat of natural disasters, especially cyclones, flooding as well as riverbank and shoreline erosion. Read the complete assessment report here.

Overall, by raising awareness about the socio-ecological drivers of change affecting the current state of mangroves in Northern Rakhine, this assessment seeks to advocate for the rehabilitation of the coastal mangroves as part of an integrated, ecosystem-based approach to DRR, thereby reducing the vulnerability of the local population.