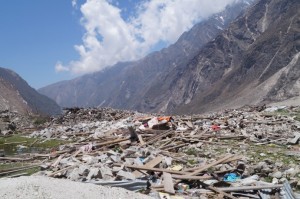 As part of the Shelter Cluster assessment conducted by REACH in Nepal, in partnership with the IFRC, REACH teams have been on the ground over the past weeks to assist humanitarian actors in responding to the post-earthquakes situation. In this framework, REACH teams examined high relief and very difficult to access terrain, such as the Langtang Mountain Valley,  situated in Rasuwa District, north of Kathmandu.

The Langtang Mountain Valley was severely affected by the two major earthquakes that struck Nepal on April 25th and May 12th, 2015. Despite significant media coverage regarding the damage, loss of life and large scale evacuations of the affected populations in such areas, little comprehensive information existed about current access to the valley nor the priority interventions required to restore access and community life within these areas. However, with the monsoon season imminently approaching, such areas were about to become inaccessible, pressing the need for immediate humanitarian intervention.

REACH thus conducted a rapid assessment to fill in this information gap. Primary data was collected between the 22 and 24 of May through an observational transit walk in the Langtang Valley, and complemented by community group discussions with displaced households from communities throughout the valley, held on the 27 of May. This allowed for the collection of key findings on the situation both before (population, services, livelihoods) and after the earthquakes (displacement, impact on the communities, damage to services and access constraints), which can inform priority humanitarian interventions. It should however be stressed that only a small numbers of individuals are reportedly planning to return to the valley before the start of the monsoon, limiting the need for large-scale humanitarian assistance.

Beyond informing a better understanding of access and needs in the Langtang Valley, this assessment also provides an operational valley guide to be used in other similar earthquakes affected areas (such as the high-mountain valleys in the districts of Gorkha, Dhading, Rasuwa, Sindulpochok and Doloahka).

All other latest resources can be found on the Nepal page of the REACH Resource Centre.