Over the last three months, a new displacement crisis has emerged in the border region of Maradi in Niger. Between 35,000 to 60,000 refugees have crossed the border from Nigeria to Niger, yet causes behind the escalation remain largely unknown. The humanitarian community has been called to act and address the mounting needs of the displaced populations. A briefing paper published by REACH provides an overview of the situation in the region.

Between April and July, an estimate of 35,000 Nigerian refugees, many of whom women and children, settled along the western part of Niger-Nigeria border. This rapid displacement has reportedly been prompted by the threat of kidnappings, sexual violence and killings, and the displaced have sought safety among host communities. The area is known for its limited services and infrastructure, meaning that humanitarian needs across the region are feared to mount.

Following an alert launched by international actors, REACH published a briefing note outlining the humanitarian situation, needs of affected populations and expected constrains humanitarian actors might face as rolling out interventions. The briefing note was drafted in June and is based on secondary data and key informant interviews.

A new displacement crisis in the making?

While marking the potential start of a new regional large-scale displacement crisis, information on the causes of violence in north-west Nigeria remains limited. According to interviews, the violence is perpetuated by Nigerian armed groups “without a name and agenda”, as one respondent described the situation. Conflict dynamics are thus drastically different to the ones seen in the eastern parts of the border, where groups like Boko Haram are known to drive displacement. 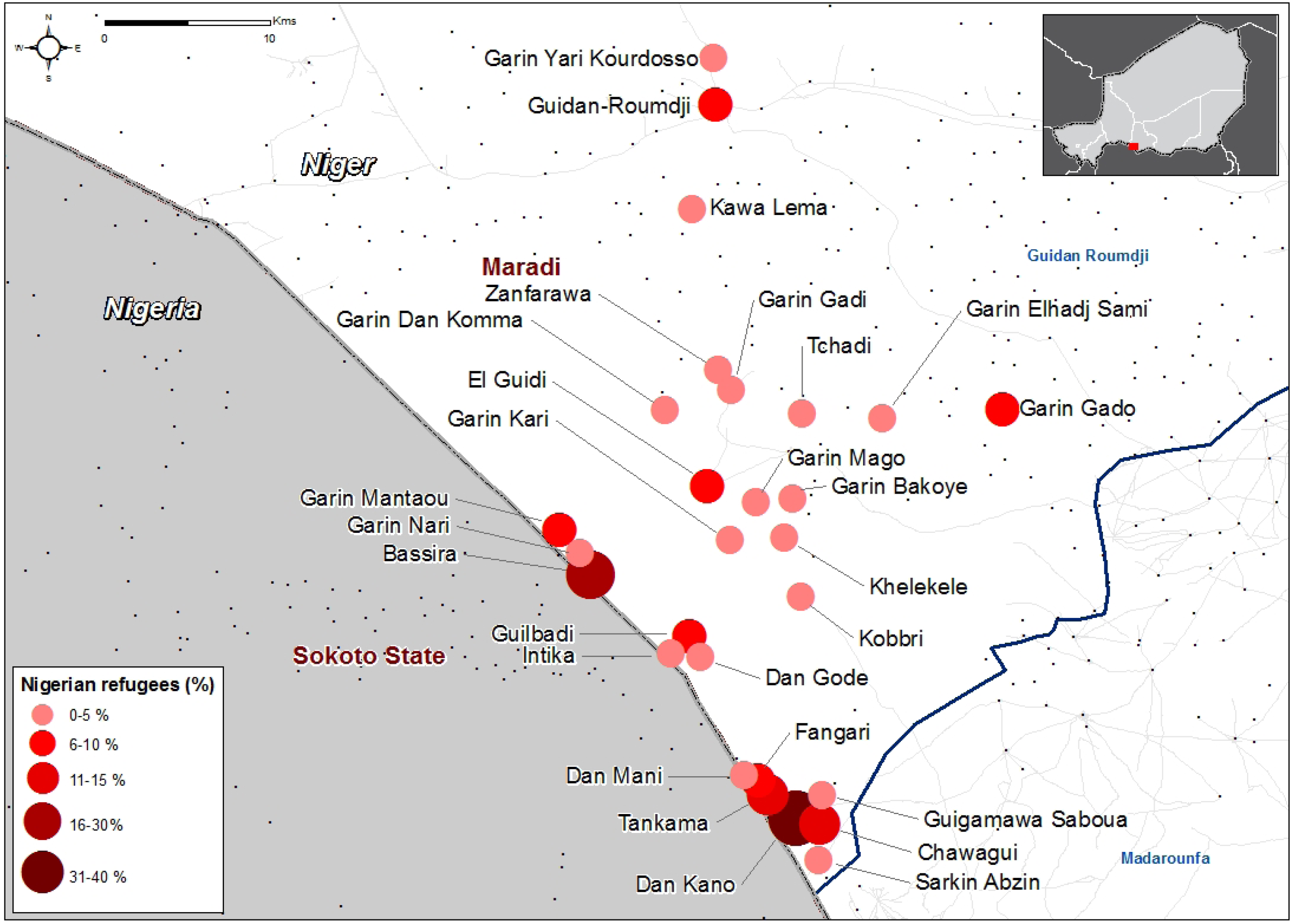 Villages in Maradi hosting Nigerian refugees, by percentage of the refugee population, as of June. The number of host villages has reportedly risen to 40 in July.

The flow of arrivals as not ceased and refugees have continued to cross the border with more than 10,000 arriving in July alone. The continuing influx of people has pushed water, sanitation and hygiene needs to the top of response priorities, coupled by shelter, health and nutrition needs. With the majority of refugees being female and almost three-quarters under-age, serious safety and protection concerns have been raised, especially in the areas of child protection, gender-based violence and psycho-social support.

In the context of the displacement crisis, significant challenges may emerge in the coming months, as vulnerable displaced and host populations are forced to cope with the consequences of the rainy season expected to continue until September.

Key vulnerabilities highlighted in the briefing note include:

As insecurity threatens to enter Nigerien territory and villages along the border are being increasingly stretched to their limits in terms of absorption capacity, the option of relocating refugees to villages further away from the border is being considered. As the region has long received development assistance, aid actors are now looking to adopt a humanitarian-development nexus approach to ensure that refugees are assisted beyond their most urgent and primary needs.

In order to limit the impact of factors aggravating displacement and to maximise the potential of the humanitarian-development nexus, a number of information gaps need to be addressed.

Read the full briefing note here.
Please note that the briefing note was drafted in June. The figures in this article have been updated to reflect recent developments.