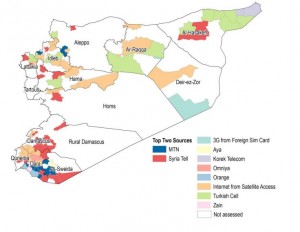 A conflict on a scale as large as the one ongoing in Syria is bound to disrupt and bring about intermissions in existing channels of communication. However, to date, few surveys have undertaken a broad analysis of information needs, channels and barriers faced in accessing communication platforms by Syrians within the country. To fill such gaps, REACH conducted a thematic assessment of communication channels and social media usage so as to provide information on the ways in which various social media and communication platforms are utilized by different population groups within Syria.

Data for this assessment was collected through the monthly ‘Area of Origin’ data collection system, where Syrian refugee participants collect data through pre-identified key informants that remain in their village or neighbourhood of origin in Syria. Key informants inside Syria were also contacted directly from Turkey. The same methodology was also used for another recent REACH livelihoods assessment of needs and humanitarian situation inside Syria which sought to assess livelihood sources and highlight limited opportunities available to sustain livelihoods in the country.

The social media assessment found a prevalent use of internet based applications within the communities assessed. With 4 million refugees in neighbouring countries and six and a half million Internally Displaced Persons within Syria, it is discernable that communication tools have become critical for the population to maintain contact with their family and friends both inside and outside the country. Among the platforms in use for communication, WhatsApp was the most reported application (cited by 89% of informants) followed by traditional voice calling and Facebook. Usage of Twitter and Youtube was also reported. Social media platforms, especially Facebook, was also cited to be used as a trusted source of information for current events within the country.

Although majority of informants reported using the internet on a daily basis, some access barriers continue to persist. For example, the costs associated with phone calls and internet communication are relatively high; on average, 3,374 SYP (US$ 18) and 4,208 SYP (US$ 22) is spent per month on internet and phone communication respectively. In addition to high costs, electricity was also cited as a critical barrier to internet access with batteries and internet cafes being used as the main coping measures to deal with it. Another cited barrier specific to the use of social media platforms was privacy protection concerns related to the reliability of privacy settings for one’s personal account and publications, which limits the usage of such platforms to communicate sensitive information.

Image: Map showing most reported internet provider by governorate as of May 2015