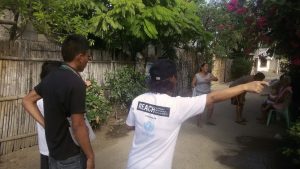 On the 8th November 2013, ‘Super Typhoon’ Haiyan (locally known as Yolanda) first made landfall, lashing coastal communities across the central island of the Philippines. With Tsunami-like storm surge and winds reaching up to 375 kilometres per hour, it was one of the most powerful storms in recorded history.

In the direct aftermath of Typhoon Haiyan, access to safe water and sanitation was severely compromised across affected areas of the Philippines. One year after Typhoon Haiyan, REACH undertook a baseline assessment to inform the UNICEF funded Phased Approach to Total Sanitation (PhATS) programme. The programme was aligned with the National Sustainable Sanitation Plan, and aimed to end the practice of open defecation in the targeted areas through facilitating changes in social norms and fuelling demand for sanitation and hygiene; sustaining demand through supply side interventions; and promoting good governance, resilience and disaster risk reduction. The programme was implemented through a coalition of 12 NGOs (Action Against Hunger; Agency for Technical Cooperation and Development; Arche Nova, A Single Drop for Safe Water; Catholic Relief Services; International Medical Corps; Islamic Relief Worldwide; Oxfam; Plan International; Relief International; Save the Children and Samaritan’s Purse), 40 municipal government authorities, the Department of Health and the Department of Education.

In February and March 2016, as the Haiyan PhATS programme was transitioning over to Government-led implementation, REACH conducted an end-line assessment to measure the changes in knowledge, attitudes and practices of the population in the targeted areas. Overall the assessment found a higher awareness of and importance given to improved practices relating to water, sanitation and hygiene (WASH) in the households and schools within the geographical areas covered by the Haiyan PhATS programme. More households were found to have their own improved sanitation facilities, and improvements in handwashing practices (reported frequency and when practised) were recorded. Increases in access to school WASH facilities and presence of mechanisms to support and maintain improved WASH practices in schools were also found.

However, the findings also highlighted several persistent challenges across Haiyan-affected areas. Notably, findings show no statistically significant difference in the proportion of households that practice open defecation, with 15.2% of households reporting at least one member continuing to practice open defecation. Focus group discussions identified a number of potential reasons for this, including households still sharing facilities, the perceived high cost of installing their own toilets, a lack of facilities outside of the home (at school, work, other public areas), and the lack of water for toilet maintenance, as well as a continued perception that open defecation by small children is inevitable. The insights relating to the ongoing practice of open defecation, even in households that have access to a toilet and in communities that have declared ‘zero open defecation’ status, indicate that local authorities should encourage and support communities to continue improving sanitation practices and facilities, to reduce the use of shared toilets at the household level and to ensure access to clean and functioning sanitation facilities in schools, health centres and other government institutions, in order to ensure that all members of a household consistently use a toilet (or practise safe disposal), no matter their age, and whether they are at home, at school, at work or in a public place.

The assessment also found a lack of trust in improved water sources combined with a lack of household’s knowledge on how to adequately treat drinking water. This is a concern and should be addressed through strengthened and publicly accountable water quality monitoring and reporting mechanisms, along with increased behaviour change communications on safe household water treatment and storage methods. Schools also need to identify solutions to challenges of reliability of water supplies (by increasing on-site storage capacities, for example) to ensure that water is available for drinking, flushing and cleaning toilets and for daily group handwashing and tooth brushing.

Through these baseline and end-line assessments REACH supported UNICEF and its partners in developing evidence-based practices for sustainable change in sanitation and hygiene behaviours in the Philippines context. It is hoped that this data will provide insights to strengthen the development of ongoing programmes in the Haiyan-affected areas, and elsewhere in the Philippines, to further increase their impact and overall effectiveness.