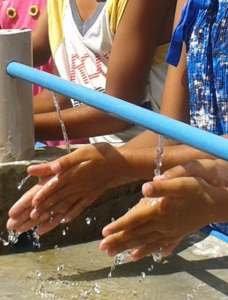 One year after Typhoon Haiyan and as the situation has stabilised, REACH conducted a large-scale study to contribute to the development of best practices for sustainable change in sanitation and hygiene behaviour in the Philippines. This assessment was undertaken between September and November 2014 as a baseline for the UNICEF funded Philippine Approach to Total Sanitation (PhATS) program, which aims to achieving universal access to safe and adequate sanitation facilities in the country by 2028.

The assessment examined  knowledge, attitudes and practices related to Water, Hygiene and Sanitation, and included a survey of 3,025 households in project areas across six provinces: Eastern Samar, Samar, Leyte, Cebu, Capiz and Iloilo. The study used a mixed-methods approach to collect both qualitative and quantitative information at household level, community level, and in schools. The assessment found significant variation between the six provinces, but revealed a high overall level of hygiene awareness and knowledge. It also demonstrated a significant gap between the reported importance of hand-washing and its practice, therefore careful selection and targeting of relevant hygiene messages will be particularly important.

At the household level, it was found that an estimated 93% of the population in PhATS project areas were using an improved source of drinking water. However, key gaps included the need to raise awareness on adequate/inadequate methods of water treatment and on the link between unsafe water and health risks other than diarrhoea. While an estimated 89% of households in project areas were using an improved sanitation facility, 17% were found to be practising open defecation. This varied significantly by province, with up to 42% of households in Cebu province having at least one member practising open defecation, but did not drop below 13%. Nevertheless, the baseline data indicated that awareness of the health risks of open defecation was already high across all project areas; which suggests that it may be beneficial to focus messaging on non-health benefits of toilets, such as prestige, privacy, comfort and well-being.

In schools, water supply emerged as a key issue, often undermining or limiting the effectiveness of other interventions, including group hygiene activities, new infrastructure and efforts to keep toilets clean. As such, addressing these water supply issues could be a particularly useful strategy. There are also opportunities for greater incorporation of WASH in both planning and funding allocation in schools in project areas, and for the establishment of more school committees responsible for promoting and overseeing WASH. Furthermore, the assessment highlighted the role of teachers as essential actors in curbing open defecation, suggesting that it may be useful to have more extensive teacher consultation and training on these issues, and to develop approaches to working closely with teachers towards zero open defecation.