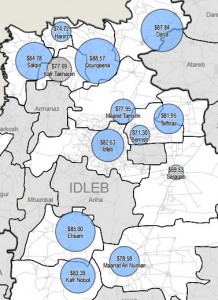 On the 26th of May, REACH carried out a training of trainers (ToT) in Antakya, Turkey, focusing on the implementation of a Market Monitoring Tool in Syria. The training was organised jointly with the Cash Based Responses Technical Working Group (CBR – TWG), which was established in March 2014 to analyse the impact of the ongoing conflict on markets in Syria and to guide the implementation of humanitarian cash programs within those markets.

The ToT focused on the review of the objectives of the project, the questionnaire and guidelines. While contextual and background presentations were given in English, technical presentations were given in Arabic by REACH national staff. In addition, participants were involved in practical exercises with tools and technology, such as the utilisation of smartphones for data collection. Many of the participants were already familiar with these type of data collection tools, which are increasingly used for remote data collection in northern Syria.

The training was facilitated by experienced REACH staffs who have been implementing this tool since January 2015, by conducting monthly monitoring exercises of key markets in Idleb Governorate, northern Syria, in February, March and April 2015. The training also included a presentation on coordinated and joint assessments from OCHA’s Assessement Coordinator.

Thanks to this training, five additional organisations will launch monthly data collection utilising this market monitoring tool. This will allow REACH and the humanitarian community to increase availibility of data and the greographical coverage, moving from 1 governorate (Idleb, currently covered by REACH) to 5 governorates in northern Syria.

This ToT was supported by the UK’s Department for International Development (DFID) and the Office of U.S. Foreign Disaster Assistance (OFDA) and was attended by 20 participants from five international organizations, members of the CBR – TWG.

Image: Map illustrating the price and availability of a range of basic commodities in sub-districts of Idleb governorate in Northern Syria.