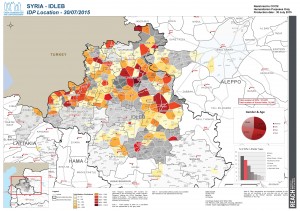 In late April 2015, the REACH Geographic Information System (GIS) team in Turkey launched a community-level Internally Displaced Persons (IDP) tracking map project. The aim of the project was to enhance the value of an IDP Tracking spreadsheet which was produced by the Camp Coordination and Camp Management Cluster (CCCM) to track notable displacements in Northern Syria following the Idleb city takeover. To this end, REACH sought to represent the data available from these tracking tables on a heat map so as to create a significant community-level output which would enable CCCM members to swiftly and clearly pinpoint the location of IDPs in most urgent need.

For the purpose of IDP Tracking, the GIS team utilizes the Common Operating Dataset (COD), a spatial dataset supplied by the Office for the Coordination of Humanitarian Affairs (OCHA) which contains points that represent the communities in Syria. Using attributes present within these points (unique identifiers called pcodes which link IDP tracking information with a unique community), REACH combined the data available from the COD and the IDP Tracking spreadsheet into a visualized heat map format.

This heat map not only shows the extent of the known displacements but also highlights gaps in existing data. For instance, it visualizes areas in which no prior displacements have been reported and also the geographic proximity of these areas to areas of known displacement. The heat map also provides a quick visual reference to determine if an area has been assessed or not. This map, along with the CCCM spreadsheet, enables evaluation of the ongoing crisis and both tools have been used by the WASH, Food Security, and Non Food Item (NFI) sectors to compare the extent of the ongoing response with the magnitude of needs.

Upon request from the CCCM chair and its members, REACH now generates governorate-wide IDP tracking maps whenever the IDP Tracking spreadsheets are updated. This map allows the CCCM members to quickly identify where to focus resources at a community-level within a governorate thereby enhancing the effectiveness and efficiency in the distribution of vital products and services to IDPs.

Total number of IDPs at a community level are represented by the red color ramp .

Total number of IDPs at a sub-district level are represented by the grey color ramp.