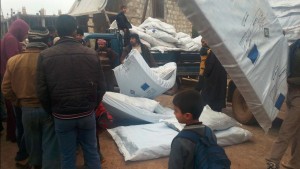 Throughout Syria, people are bracing themselves for winter while continuing to deal with the effects of protracted conflict, such as damaged infrastructure and limited access to essential services. The crisis, which is now entering its fifth year, has left 13.5 million people in need of assistance inside the country, including more than 5.6 million children. In light of this, in October 2015 REACH conducted an assessment to identify priority needs for the coming winter, as well as highlight gaps in the humanitarian assistance provided last year.

The assessment used REACH’s Area of Origin network to gather community-level information from Key Informants currently residing inside Syria. The assessment found fuel, winter clothing and blankets to be the top priority needs as reported by 90%, 81% and 72% of assessed villages respectively. The reported prices of winterisation items varied across the country, but were highest in Deir ez Zor, Al Hasakeh, Ar Raqqa and As Sweida governorates. Furthermore, there was a reported lack of collective storage capacity for winter items in Ar Raqqa, Deir ez Zor, Homs, Lattakia and Quneitra governorates. Individual factsheets summarising governorate-level findings are available here.

The assessment also collected data on priority needs and assistance received last winter. Key Informants in 302 villages spread across 13 of the 14 governorates in Syria were asked about the winter assistance received in their village last year, as well as the current capacity of the village to store winter items, the priority needs for the coming winter, and current prices of winter items. Notably, none of the villages assessed in Deir ez Zor governorate reported receiving any form of winter assistance last year. While fuel was the most commonly reported priority need across the country (81% of villages assessed) at the time, only 16% of villages reportedly received fuel assistance; stoves and heaters were reported as priorities in 182 villages, but were reportedly received in only 36. Winter clothing and blankets, however, were reportedly received in 149 and 122 villages respectively, and were identified as priorities in over 200 assessed villages.

Overall, this winterisation assessment provides humanitarian actors with key information needed to deliver assistance based on the needs identified by Syrian residents themselves. This information comes at a crucial time for Syrians in need of life-saving assistance given the imminent winter months.