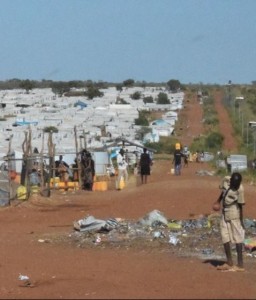 South Sudan is nearly two years into a violent conflict that forced an estimated 1.6 million people to leave their homes. The vast majority of these people remain displaced with marginal access to the necessities of life – clean water, food or shelter.  Many internally displaced persons (IDPs) have integrated into host communities across the country, but more than 200,000 others reside in seven Protection of Civilian sites (PoCs).

The humanitarian community and the United Nations, whose mandate has been extended until December 2015, are now involved in discussions regarding the possibility of facilitating the spontaneous relocation and reintegration of the PoC residents in their preferred areas of return. REACH team in South Sudan, in collaboration with the European Commission’s Humanitarian Aid and Civil Protection department (ECHO) and the Camp Coordination and Camp Management (CCCM) Cluster, is leading the assessment to gather an understanding of what the intentions of the IDPs are, where their areas of preferred return are and what factors will enable returnees to live peacefully in their desired return location. In this context, since August 2015, REACH has conducted intentions assessments in UN House PoC1 and PoC3, in the Mingkaman spontaneous settlement site and in Bor, Melut, Malakal, and Wau.  Further assessments will be completed in Bentiu PoC by the close of the year.

Preliminary findings show that IDPs typically want to return to the counties they consider as their ancestral homeland.  In UN House, only 26% of the respondents stated the willingness to return to Juba, despite the fact that over 50% had their pre-crisis homes there. Respondents in the UN House PoCs indicate security as the main factor for entering the PoC, and the lack of it in their preferred return locations as the main reason for staying. The second factor keeping IDPs in the site is the presence of general food distribution.  Moreover, since there is no land available for cultivation inside the PoC, finding a peaceful solution to finally end the conflict, as well as providing food and livelihood support for IDPs, will be critical factors informing choices to voluntarily leave the PoCs in the future.

REACH will continue to provide information collection, management and dissemination services to support the IDP response in South Sudan.  This support will enable stakeholders to formulate appropriate strategies to ensure the sustainability of IDP returns while informing the trajectory of the ongoing discussion of IDP returns by providing a rigorous analysis of the intentions and perceptions of IDPs.