With operational markets available across northeast Syria, cash-based programming is an aid modality that could be brought to the forefront of the humanitarian response in the country. Recent findings back the argument for cash-based aid and suggest that the approach is the preferred mode of support for communities. In addition to this, cash is known to positively impact local markets and build resilience both during and after conflict.

Over eight years of destructive conflict has taken a heavy toll on Syria’s economy. Massive internal displacement, emigration and mortality have greatly weakened the population, out of which more than half are estimated to be in the need of assistance and a quarter food insecure. Parallel to humanitarian challenges, damaged or destroyed infrastructure and the lack of agricultural production and employment add to the severity of the symptoms of the crisis. The national economy has suffered the same. Between 2011 and 2017, the gross domestic product of the country decreased by more than 60 percent. According to estimates, more than 80 percent of Syrians live below the poverty line.

Despite these severe conditions, local markets continue to operate across Syria.

With this in mind and with support from the Cash Working Group in northeast Syria the Cash and Markets Advisor for Whole of Syria, Whole of Syria Food Security Cluster, and the Northeast Syria Food Security Cluster, REACH conducted an in-depth cash and markets assessment across northeast Syria. The assessment aimed to better understand the feasibility and implications of scaling up cash-based interventions, community preferences towards assistance, as well as market supply chains. 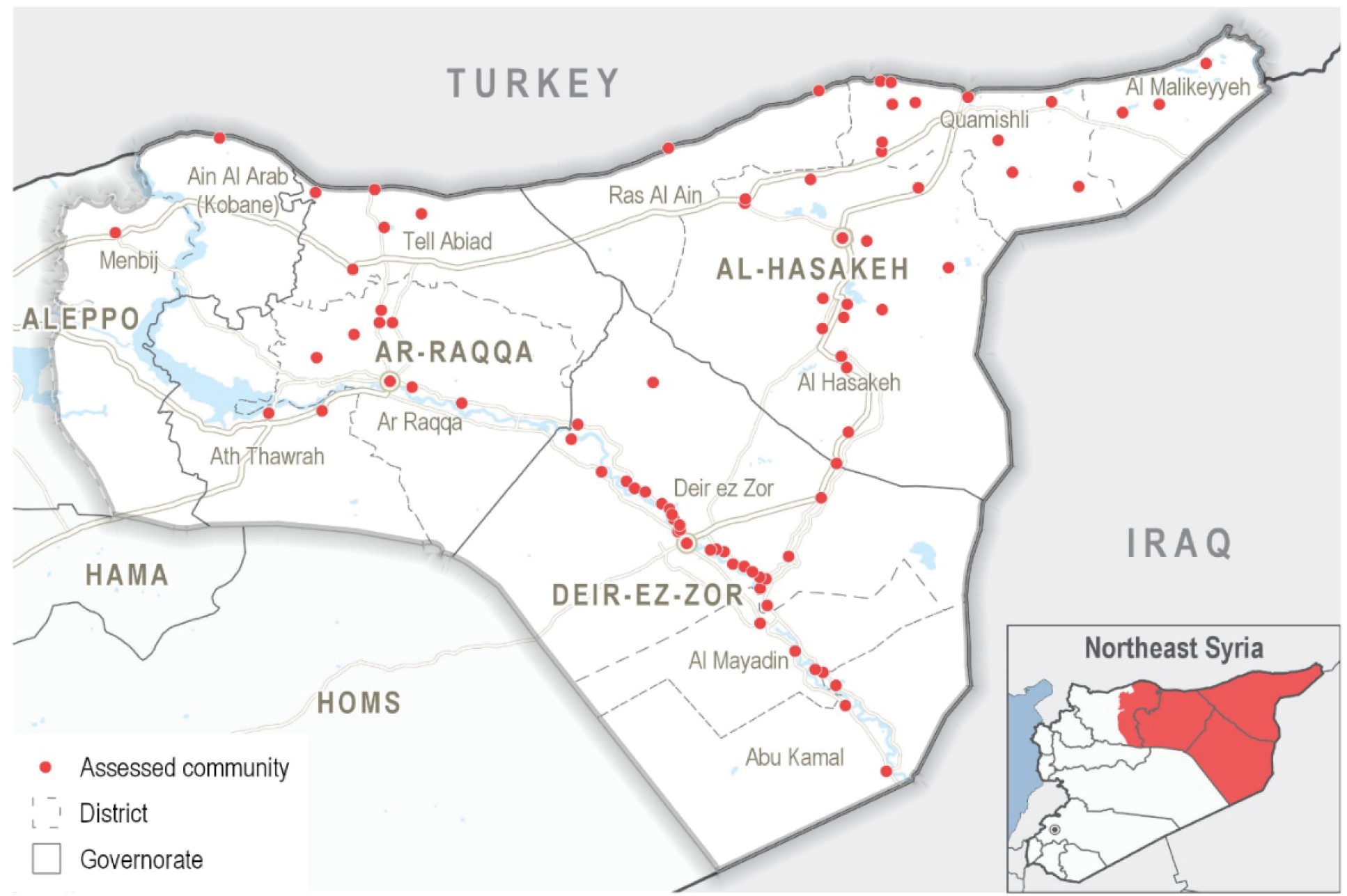 The Cash and Markets Assessment gathered information from some of the most conflict-affected regions of northeast Syria.

Cash as aid – risks or fear of risks?

The assessment found that cash-based assistance is both is feasible in the Syrian context and preferred by assessed communities across northeast Syria.

Almost 80 percent of interviewed key informants reported cash as one of their community’s most preferred forms of aid — a figure trumping in-kind aid or vouchers significantly. Of those who reported a preference for cash, slightly over 70 percent reported direct physical cash as a preferred type of assistance, followed by 22 percent preferring “cash-for-work” support, a mode of support which provides temporary employment opportunities and is often focused on public, community-based projects.

Furthermore, while formal banks and loans granted by banks were generally reported as unavailable, nearly all interviewed community members reported the existence of hawala offices in their community or in a nearby community. The hawala system enables money transfers between individuals and organizations in different locations and relies on trust between brokers in the tracking of debts. Many humanitarian organisations rely on these hawala agents inside Syria to transfer funds for both operational and cash-based programming activities.

While the use of cash-based programming is growing, the majority of humanitarian assistance within Syria remains in-kind aid. The reasons behind this are manifold, one of them being the largely unfounded fear of corruption or diversion of cash-aid to other means. While risks are country, region, and locale-specific, there is no evidence that cash-assistance is more prone to diversion than other aid modalities. In fact, the assumption of in-kind aid being more risk-free has also been called to question.

Despite the lack of evidence, the fear of diversion has led to suspensions of cash-aid in the past years. These measures have had cross-cutting repercussions with the sudden loss of purchasing power affecting the entire economy including shopkeepers, transportation providers and traders, processors, suppliers, and farmers. Sudden changes – even though temporary – can thus impact both individual standards of living as well as local economic structures drastically.

In addition to looking at the feasibility of cash in terms of beneficiaries, the assessment also zoomed in on access to markets. The assessment found that markets were available within or nearby all assessed communities, and that cash was the method of payment most commonly used by communities across northeast Syria. A lack of cash was the most commonly reported challenge to both accessing markets and purchasing basic goods. These findings all point to the fact that cash-based programming would likely support the ability of consumers to increase their purchasing power, thereby also bolstering local economies, including throughout local production lines.

This does not mean market systems across northeast Syria function without challenges. The study found, for example, that a common fear related to the ability of individuals to access markets was the fear of the forced conscription of male youth. Assessed communities also suffered from a chronic lack of reliable electricity, which particularly prevented the storage of sheep and goat meat.

Droughts in 2017 and 2018 and subsequent poor harvests were also reported to have caused supply chain actors to rely on imported supplies purchased at high costs through the Menbij corridor. Menbij, in Aleppo governorate, serves as the major corridor that funnels both imported goods as well as domestic goods produced in the south, central or the northwest into northeast Syria. The prices of these imported goods — particularly potatoes and wheat flour — have increased for consumers.

A market-based approach to humanitarian aid

Cash-based programming is a market-based approach that works through, and supports, local markets, allowing individuals to fulfil their needs in a dignified manner. Cash allows individuals to take agency of what they want based on their individual needs, while providing flexibility in how the aid is used. Where one household may purchase food with cash assistance, for example, another may pay off debts or pay for rent.

“Cash-based programming is one way the international community can support the resilience of local economies across Syria,” REACH Country Coordinator for Syria Nanki Chawla explained. “Not only are markets bolstered by providing cash, but humanitarian aid is also adjusted to the preferences of beneficiaries, returning agency and decision-making power to vulnerable communities.”