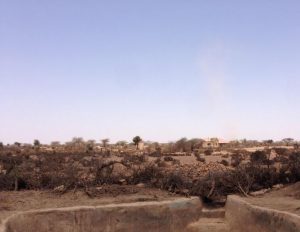 Cumulative and prolonged droughts in Somalia have been exacerbated by the breakdown in civil administration over the last 25 years in many areas of the country, and more recently by the changing global environment, especially the el-Nino weather system. Most recently, 3 seasons of below average rainfall have contributed to an emerging drought situation in the north of Somalia. According to rainfall monitoring from the Somalia Water and Land Information Management (SWALIM) and population estimates from Worldpop, 5 million people are living in areas currently experiencing drought in the Somaliland and Puntland states of northern Somalia.

In response to this slow-onset crisis, REACH was deployed to initiate a Somalia Rapid Needs Assessment (SIRNA) for OCHA and the Inter-Cluster Coordination Group (ICCG) at the request of the WASH Cluster Somalia in March 2016. With data collection taking place between March and April 2016, the SIRNA consisted of a sampled household assessment covering 1210 households in Somaliland and Puntland, 124 Key Informant Interviews and mapping 649 facilities and services.

The assessment highlighted the need for livelihood support to enable recovery, with pastoralism dependent communities having reported high rates of livestock loss – 79% of households in Puntland and 73% of households in Somaliland. In the event of continued drought immediate support to water resources will be required, with 18% of households in Puntland and 30% in Somaliland reported a water availability below the SPHERE minimum emergency standard of 7.5 litres per household member per day. Furthermore the dependence of 74% of households on uncovered water sources and limited use of household or community level water treatment – raises concerns about access to safe drinking water. Households also raised access to healthcare as a major concern, with over half of households in both Puntland and Somaliland reporting that they experienced a reduced ability to access health services since the drought began, especially in remote communities where travel to centralized services can be expensive.

With initial responses ongoing, findings from the SIRNA will be used to inform the second-stage response and recovery from the ongoing drought conditions in the Somaliland and Puntland. Initial findings highlight the need for combined cross-sector responses, greater information dissemination to those affected by drought and the recalibration of assistance to all drought affected areas. Preliminary findings factsheets for each of the states assessed and 8 regions of Somaliland and Puntland can be accessed here. To access the full SIRNA report, click here.