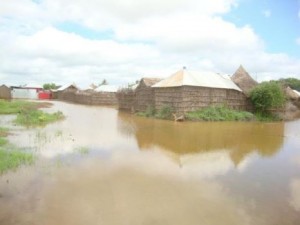 In October 2015, the Middle Shabelle area of Somalia was severely affected by flooding caused by the Deyr seasonal rains. An estimated 4,899 households were reportedly affected by river floods and approximately 5,406 households by flash floods. This not only adversely affected livelihoods but also brought about displacement to nearby communities. In terms of livelihood, health along with water, sanitation, and hygiene (WASH) emerged as immediate primary concerns with response being largely limited to responding to breakages through bag provision, canal digging and river embankment although some preparedness training and awareness messages have also been reported.

In general, up-to-date information remains limited and siloed, which has furthered the need for an inclusive assessment in the area. In this context, through expressed interest from the Inter-Cluster Coordinating Group (ICCG) and upon a trigger request by the WASH Cluster, OCHA requested REACH to initiate a Somalia Initial Rapid Needs Assessment (SIRNA) for the Deyr 2015 related flood-affected areas in Middle Shabelle, Somalia. Facilitated by REACH, and funded by the European Commission’s Humanitarian Aid and Civil Protection department (ECHO) and the United States Agency for International Development (USAID), the SIRNA was rolled out in 14 communities in the most affected areas – Balcad, Jowhar and Mahaday Town areas – between 9 and 12 November 2015.

The assessment clearly demonstrated that the affected communities are in need of humanitarian intervention with several areas demonstrating high levels of vulnerability that appear to have been exacerbated by flooding. However, flooding has caused only limited and highly localized displacement; most households surveyed were within their home community, either in settlements or with other host community members and only 9% of those surveyed were internally displaced persons from elsewhere. Findings also revealed limited immediate access to health services, although secondary data suggests that the issue may have been with awareness of health facilities in surrounding areas rather than actual availability. Moreover, issues were widely reported in terms of water quality and quantity and 85% of households reported having less than 10 litres of water per person, per day. Lastly, all school facilities assessed in the target communities had experienced some level of damage as a result of the flooding.

The overall purpose of this assessment was to inform response within the communities most impacted by both types of floods – riverine and flash flooding- in Middle Shabelle. Additionally, findings may also improve general understanding of displacement trends although this was not a central feature of the assessment.

Image: An area affected by the 2015 Deyr floods in Middle Shabelle, October 2015