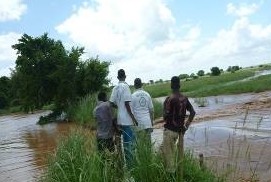 On 29th May 2015, in response to the flooding of the Middle Shabelle region in Somalia, REACH, in coordination with the Inter-Cluster Coordination Group (ICCG) and the Office for the Coordination of Humanitarian Affairs (OCHA), triggered a Somalia Initial Rapid Needs Assessment (SIRNA). Funded by the EU Humanitarian Aid and Civil Protection Department (ECHO) and the United States Agency for International Development (USAID), the aim of the assessment was to evaluate the extent of the damage caused by the floods and the impact this had on the capacity of the affected population to meet immediate survival needs, and to inform humanitarian response accordingly.

Data collection comprised of both primary and secondary data in 26 villages from the three affected districts (Bal’ad, Jowhar and Mahadaay). An estimated 8,529 households reside in the affected area and 1,500 households had been displaced. Primary data collection took 5 days and included household interviews, key informant interviews, and facility and perimeter mapping.

The primary purpose of this assessment was to inform response for the most affected villages. The findings identified critical information and priority needs both at household and facility levels across all the villages most affected by the floods. The overall findings indicated WASH, Health and Food Security sectors as being amongst the sectors most affected. The report was used by OCHA and the clusters to promote appropriate responses by the cluster partners who were operating in the affected areas.