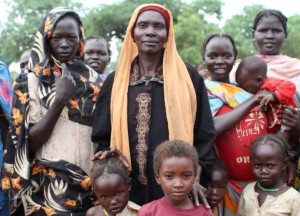 The outbreak of violence between armed groups in South Kordofan in June 2011, which later spread to Blue Nile State in September 2011, caused thousands of people to flee their homes – the vast majority of which crossed the border to neighbouring South Sudan. While those from South Kordofan primarily fled to Pariang County, in Northern Unity State, refugees from Blue Nile crossed into Maban County, Upper Nile State.

Today, more than 133, 232 individuals are living in the four refugee camps established in the county: Doro, Yusuf Batil, Gendrassa and Kaya. This vast and continuing influx of refugees has not been without consequences. At the onset of the crisis, lack of funding, weak governance, and logistical and access constraints hindered the adequate provision of assistance for refugees. The scale of the refugee influx also meant that the needs of the Mabanese host communities, numbering  around 36,000, was not considered in the initial response, leaving these already vulnerable communities quickly outnumbered by new arrivals.

Over the last four years, pressure on natural resources such as land, food and shelter materials has increased due to the influx of refugee (and now IDP) populations in the area. Consequently, tensions between the two communities have risen, frequently developing into violent conflict, which hinders the delivery of aid to both refugees and hosts, and affects the integration of refugees in the area. In response REACH, in partnership with UNHCR, conducted a study to map tensions and disputes between host communities and refugees in Gendrassa during November 2015. Specifically, the study aimed to identify key topics of dissension or conflict (specifically focusing on natural resources); major conflict hotspots; and identify shared priorities and connectors.

REACH found that most important components of tension and dispute between refugees and neighbouring host community villages was in regards to natural resources and land, livestock and wood. Overall, access to water was not found to be a prominent issue. However, REACH’s mapping exercise highlighted discontinuities in perceived land ownership by both communities, and the official boundaries.

The findings from this assessment will help inform conflict sensitive programming of humanitarian actors, with the aim of reducing tensions among the two population groups.  Humanitarian and government actors in Maban will therefore need to address some of these identified causes of tension by supporting both formal and informal approaches to conflict resolution.  Notably, it is important that aid and governance actors ensure that refugees and host communities feel safe, free to move, and are able to ensure their livelihoods. To read the full report, click here.