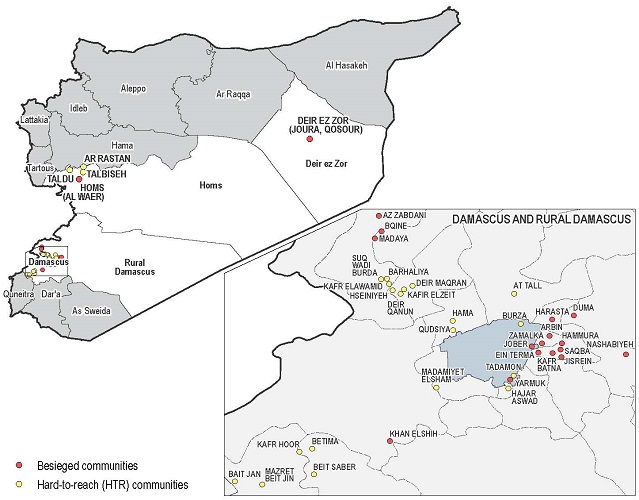 The Syrian conflict, now in its sixth year, continues to plague civilian populations, causing acute shortages of food and basic services, amid protracted and widespread violence.  The situation is particularly critical in besieged and hard-to-reach areas, where restrictions on movement and access severely hinder the ability of populations to meet their needs. Understanding the impact of access restrictions on the humanitarian situation is a critical component of a unified and coordinated response amongst humanitarian actors.

In order to provide aid actors with a more complete understanding of the needs of vulnerable communities across Syria, REACH, in partnership with the Syria INGO Regional Forum (SIRF), regularly monitors the humanitarian situation within communities facing limitations on civilian movement and humanitarian access. Between 27 March 2017 and 5 April 2017, REACH assessed the humanitarian situation in 40 communities, 18 of which are classified as besieged by the UN and 22 as hard-to-reach, gathering information through a total of 175 community representatives in Deir Ez Zor, Homs, Rural Damascus and Damascus governorates.

Key findings show that, despite some positive developments, many assessed communities saw reductions in the availability of goods in markets and deteriorating access to basic services. Of the 40 communities assessed, 21 did not receive humanitarian aid in March, nor were accessed by commercial vehicles, making them particularly vulnerable. A decline in the availability of food and non-food items, fuel, and medical items was reported in communities where access restrictions tightened in March. More than a third of assessed communities reported depleting stocks of medical items, with a deterioration of the health situation in Eastern Ghouta and Burza especially. In Deir Ez Zor, which has reported extreme food insecurity since assessments began, populations continued to rely on extreme coping strategies, including spending days without eating and consuming weeds or non-food plants. Additionally, in March, only an estimated 20% of Deir Ez Zor residents had any access to electricity.

Conflict within the community or in surrounding areas of Joura and Qosour (Deir Ez Zor city), Burza, Jobar and Eastern Ghouta led to a deteriorating humanitarian situation in March, affecting access to education and medical services. In contrast, in Al Waer and the communities of Wadi Burda, where truce agreements were recently signed, humanitarian conditions improved with the de-escalation of conflict. To prevent renewed deterioration of the humanitarian situation, however, continued humanitarian access needs to be guaranteed.

Access REACH March Syria Community Profiles for an in-depth analysis of the humanitarian situation in besieged and hard-to-reach areas: