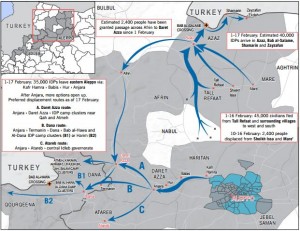 Since January 31st, intensified conflict in Aleppo Governorate has prompted the displacement of at least 70,000 people from rural villages in northern Aleppo governorate and from eastern Aleppo city, seeking protection and humanitarian assistance in areas close to the border of Turkey. Additionally, according to REACH findings, 50 to 70% (i.e. corresponding to 127,500 to 178,500 people) of the remaining population of Aleppo city could potentially leave if conditions continue to deteriorate.

REACH’s third rapid assessment of Aleppo governorate, estimates that at least 47,400 people have fled from rural Aleppo governorate, traveling northwards to A’zaz and Bab al Salame, close to the border with Turkey, to seek refuge in the hope that the border will open. As shown in the map, further displacement is taking place towards secondary locations within Syria. In the meantime, signs of strain are becoming apparent in host communities, with the price of key commodities, in particular red lentils, bulgur, eggs and butane, reportedly doubling in price than those in other districts.

In the same period, in fear that entry points and supply lines would be cut off in the near future by the spread of conflict, approximately 30-45,000 people fled their homes from eastern Aleppo city, via Daret Azza, to the west, traveling onwards towards camps in Atmeh and Bab al Halwa, Despite fears of increasingly restricted access, the road to access eastern Aleppo has remained safe and functional to date, allowing both families to leave and for goods and supplies to enter the city. To address the needs of the remaining population, in the case of increasing isolation, local councils and relief committees have been preparing stockpiles of food, fuels and medical supplies. However, while prices for most foods and household items have not increased dramatically to date, key informants reported markedly higher prices for flour, bread and chicken compared to nearby areas in Aleppo and Idleb governorates.