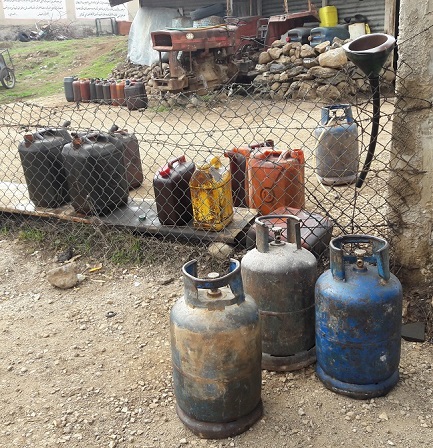 Different types of fuel for sale in a rural southern Syria market.

As the Syrian crisis reaches the end of its sixth year, monitoring markets within the country to understand how they cope with challenges created by the conflict becomes increasingly crucial. Over the years, prices of food and non-food items (NFIs) have risen sharply, the value of the Syrian pound has plummeted, and Syrian families have had to stretch their dwindling budgets further each month to survive. Better access to markets and income-generating opportunities are critical components of the humanitarian response and early recovery efforts. Cash-based programming (providing vouchers or cash transfers to help households cover the cost of necessary purchases) can help improve access to markets and lighten the financial burden of vulnerable populations. To successfully implement cash-based programming, though, humanitarian actors need reliable, up-to-date, and highly local information about the functionality of markets and the cost of living in Syria.

In February 2017, the Syria Market Monitoring Exercise expanded its coverage significantly. For the first time, price data was collected in the southern Syria governorates of Dar’a and Quneitra, with further expansion into Damascus and Rural Damascus expected in the March round. Such an expansion has enabled REACH to analyse more thoroughly variations in price and availability across regions, which will become increasingly vital as more actors begin to launch and scale up their cash-based programming in southern Syria.

The February round of data collection found bread and fuel to be 65-90% less expensive in northeast Syria than in other regions of the country, thanks to the provision of heavy subsidies by local councils; differently, food items that did not benefit from these subsidies, including chicken, bulgur, and lentils, tended to be 15-35% more expensive in the same region. Other food items such as cucumbers, tea, and tomato paste were found to be most expensive in the northwest, with cucumbers becoming particularly rare and more prone to shortages and price spikes since the beginning of 2017. The median cost of a Survival Minimum Expenditure Basket (SMEB) – which represents the minimum amount of food and NFIs a Syrian household needs to purchase each month in order to survive – was generally higher in southern Syria, largely due to greater expenditures on cooking fuel in this region.