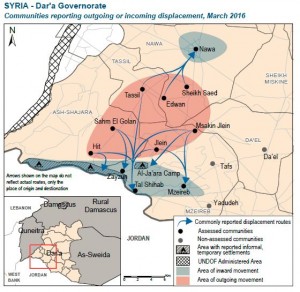 Since March 21st, conflict in southwest Dar’a governorate has intensified, following a period of post-ceasefire relative calm. REACH conducted a rapid assessment to identify patterns of displacement caused by the recent conflict, and detail the humanitarian needs of both recently displaced people and people who remain in conflict affected communities.

Conflict affected areas include Tassil, Edwan, Sahm el Golan, Jlein, Msakin Jlein, Sheikh Saed and Hit (see map). People have fled from these locations in two primary streams: northwards to Nawa, and southwards to communities along the southern Jordanian border. The recently displaced in Nawa are primarily staying in existing shelters within the community, whereas near the border around Zayzun, Tal Shihab and Mzeireb people are staying in open spaces, tents and cars. These people are particularly vulnerable due to a lack of services, as well as limited access to food and water. Future movement is ultimately dependent on the evolving conflict, with many expected to return to Hit, Jlein, Msakin Jlein and Edwan if the violence subsides.

Through this rapid assessment, REACH found that in the immediate term, safety/security and emergency shelter relief, to the recently displaced, should be considered a priority, in particular tents for those who have settled in the countryside and safe spaces for those within villages and towns. In both communities receiving IDPs and communities affected by conflict, some schools have stopped operating in the past two weeks in order to house people; shelter is therefore also a priority in communities which have seen outward movement due to conflict. Further, prices of food and fuel in both sets of communities have increased over the past two weeks, and food assistance was the third most commonly reported priority need.

For more information on the situation in Dar’a governorate, read REACH’s full report: Displacement and Needs in Southwest Dar’a, Syria.