The Rohingya refugee camps in Bangladesh host roughly 850,000 refugees. The crisis is in its fourth year now and prospects of return of refugees to Myanmar continue to be uncertain. Over the past years, successive joint response plans have highlighted the importance of a meaningful and dignified inclusion of individuals across all age groups and persons with disabilities into humanitarian response programming. However, a lack of relevant data has complicated evidence-based inclusive programming. In this context, a recent REACH Age & Disability Inclusion Needs Assessment for the first time provided comprehensive information on disability prevalence across camps, as well as on the specific requirements, barriers and preferences of older persons and persons with disabilities.

Global commitments outlined in the Charter on Inclusion of Persons with Disabilities in Humanitarian Action highlight the importance of collecting data on persons with disabilities disaggregated by age and gender as a basis for their meaningful inclusion in planning, implementation, and monitoring of humanitarian programming. In Bangladesh, the meaningful and dignified inclusion of all individuals, including persons with disabilities and older persons aged 60 and above, in the humanitarian response has continuously featured as a cross-cutting component in response planning. Systematic age- and gender-disaggregated data collection on persons with disabilities has been limited. Moreover, any existing data was unlikely to fully reflect persons with disabilities’ experiences, as data has usually been collected by proxy from other household members rather than from the concerned individuals themselves. Similarly, inconsistent assessment of disability prevalence has led to a wide range of estimates but no widely accepted estimate of disability prevalence being available for Rohingya refugee camps. In this context, the recent Age & Disability Inclusion Needs Assessment filled critical information gaps, while also providing important methodological insights into the assessment of disability prevalence.

The assessment was designed to directly capture the concerned populations’ voices and experiences in a dignified fashion. This means that information was collected directly from the concerned individuals if they were present, aged 18 and above, and able to respond. Only if this was not the case, information was collected by proxy from another adult household member. Moreover, rather than using a standard short set of questions commonly used to assess disability prevalence, an extended series of questions was used to assess disability prevalence among adults. For children, modules specifically designed to assess disability prevalence among children were used. Lastly, with support from disability specialists, focus group discussions were conducted directly with older persons, persons with disabilities of different ages, ranging from 11 to 81 years old, and caregivers of children with disabilities.

Including all concerned individuals in data collection is not only more dignified, but also allows to directly capture their perceptions and experiences, and will thus generate more accurate results. In fact, evidence suggests that estimation of disability prevalence by proxy – while generally deemed acceptable –  may often result in underreporting. This is likely partially reflected in the higher disability prevalence found in the current assessment compared to previous studies.

However, the fact that roughly one-third of households reportedly had a person with disabilities, compared to the 3% to 14% of households found in previous studies, is in part also driven by the extended set of questions used. Specifically, this extended set of questions includes an assessment of difficulties in functioning related to anxiety or depression, which is not included in the standard short set of questions, while findings suggest that difficulties related to anxiety and depression are the most prevalent forms of functional difficulties among the assessed population. Thus, different disability prevalence estimates always have to be compared and interpreted cognisant of the employed methodology in each case, while the types of functional difficulties included into any assessment of disability prevalence have to be carefully considered depending on the context. More importantly, the high reported prevalence of anxiety- or depression-related functional difficulties further highlights the need for a continuous consideration of less “visible” forms of disability in data collection and humanitarian response programming. 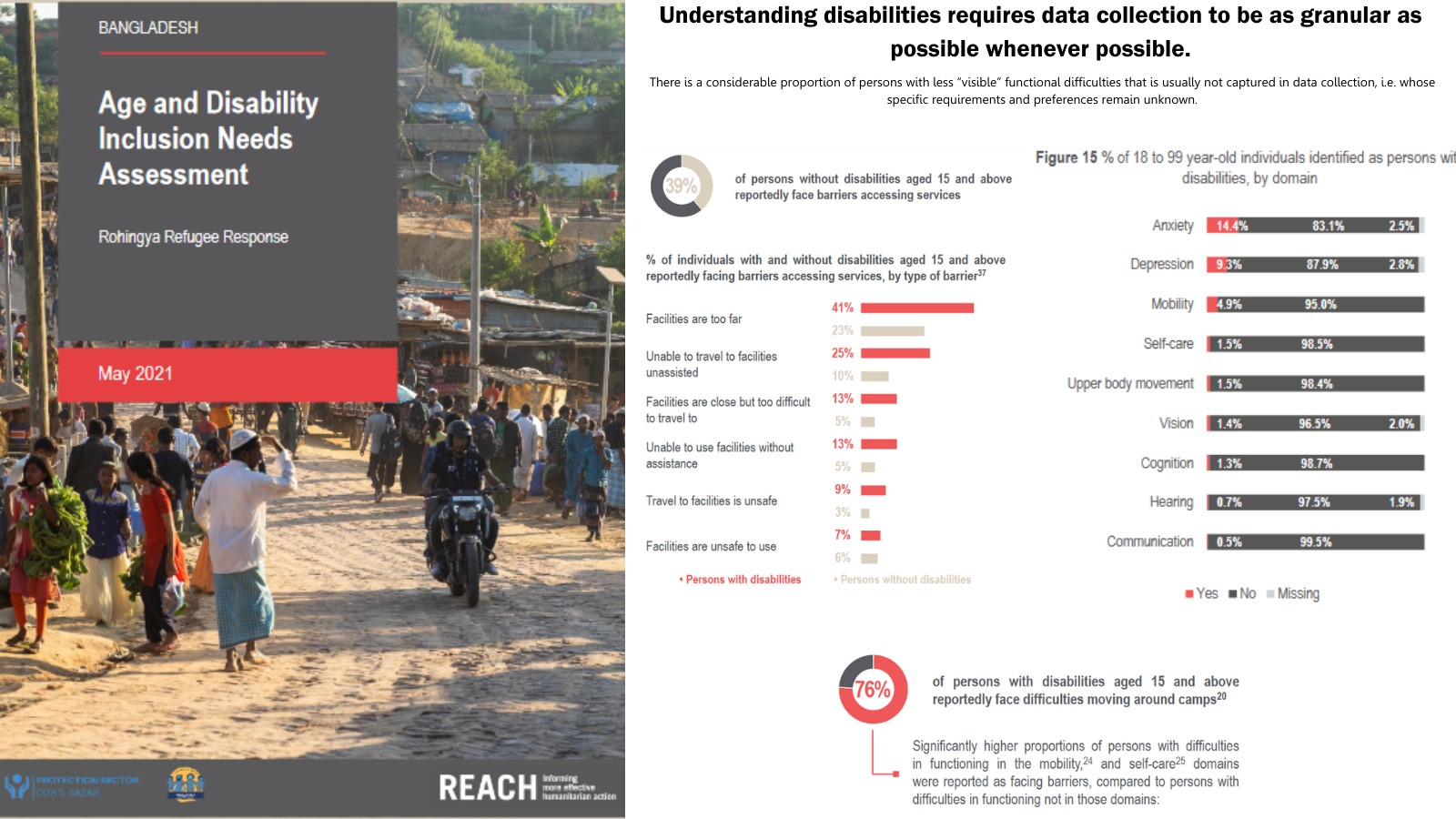 Persons with different types of disabilities, of different genders and ages all face unique barriers

The full catalogue of REACH information products published on Bangladesh can be accessed on the Resource Centre.